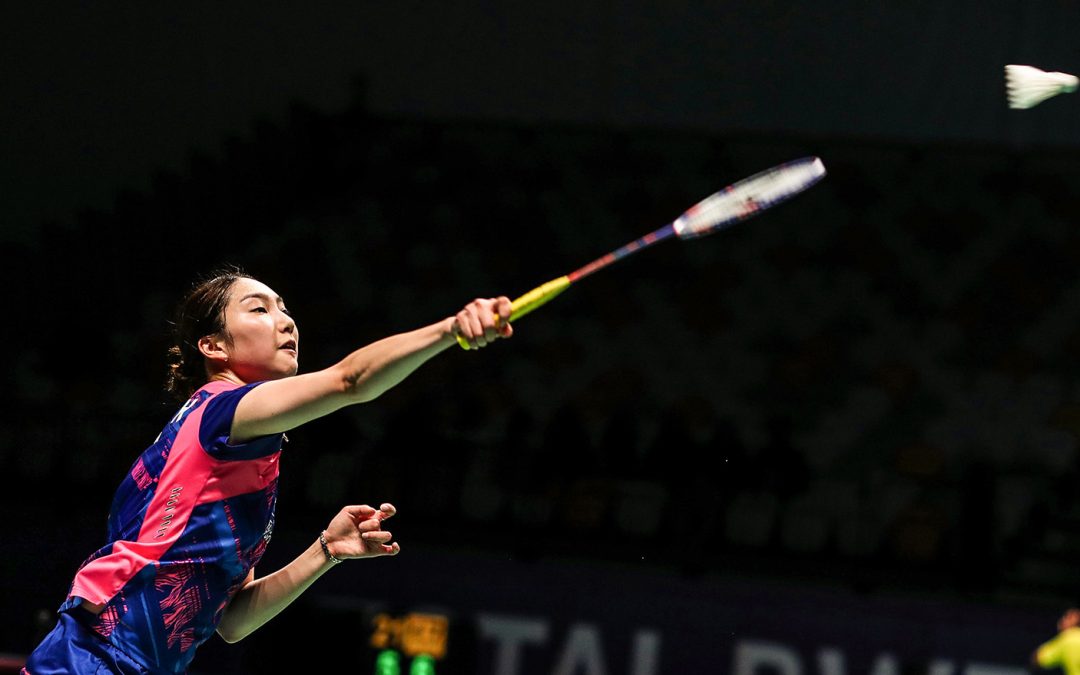 Chou wins Taipei badminton men’s singles title
Home favorite Chou Tien-chen clinched the men’s singles title at the Yonex Chinese Taipei Open after a comfortable victory over his South Korean opponent. The world No. 2 easily swept aside world No. 47 Heo Kwang-hee 21-12, 21-13 in straight games in a match that lasted 37 minutes. Top-seeded Chou played a superb net game with a solid defense to take the first game 21-12. “Taiwan! Lets Go! Chou Tien-chen! Lets go!” the crowd in the Taipei Arena cheered throughout the match, while thunderous applause filled the venue at the end of every rally Chou won. With the raucous support of the home crowd, which included President Tsai Ing-wen, Chou won the second game 21-13. “Taiwan will just get better and better and I hope my performance can get into your hearts,” Chou said. “I will continue to do my best and hope to win a medal at the Tokyo 2020 Olympics.” The win was Chou’s third men’s singles title at the event after winning the title in 2016 and 2017.

The champions in the men’s doubles
Men’s doubles pair Goh V Shem-Tan Wee Kiong battled through blood, sweat and tears to claim their first title in eight months. They overcame South Koreans Choi Solgyu-Seo Seung-jae 21-19, 15-21, 23-21 to win the Chinese Taipei Open. Sunday’s dramatic triumph, earned in 62 minutes, was the duo’s second success in 2019 having clinched the Thailand Masters back in January. Goh-Tan had been in scintillating form at this tournament, having dispatched former world number one Lee Yong-dae-Kim Gi-jung in the quarter-finals in just 37 minutes. They continued in the same vein in the semis, coming from a game down to beat experienced Danish pair Mathias Boe-Mads Conrad-Petersen 18-21, 21-11, 21-12. In the final, Goh-Tan started off strongly to take the opening game 21-19, but the Koreans recovered to level at 21-15. Their fitness levels proved to be decisive in the decider as their relentless attacks in the closing stages paid off handsomely.

The victory proved they were slowly beginning to rediscover their best form, which took them to the top of the world standings in 2016. The world number 15 pair were below par until last year, and eventually made the decision to leave the Badminton Association of Malaysia (BAM) to go independent. The move looks to be paying off, as Goh-Tan also did well at the Malaysia Masters and New Zealand Open with semi-final showings this year. Both shuttlers will be aiming to take this form to the China Open, which begins on September 17 and features some of the world’s best pairs. Goh-Tan will face Dutch duo Jelle Mas-Robin Tabeling in their opening match.

South Korea won the women’s singles
South Korean women’s singles champion, Sung Ji-hyun, successfully won the 2019 Taiwan Open at Taipei Arena. Sung Ji-hyun in the final successfully defeated the Canadian second seed Michelle Li, with a score of 21-11, 21-9. Sung Ji-hyun started the game well after winning 4-0 over Michelle Li at the beginning of the first game. Repeatedly, Sung was able to gain points through hard shots and accurate drop shots. Sung also reached the game point in the position of 20-10. Li could still add one more point, but Sung’s victory rate was unstoppable.

The deciding game of the women’s doubles also featured an amazing scoreline but that was a totally different contest.  Jongkolphan Kititharakul / Rawinda Prajongjai were neck-and-neck with Kim So Yeong / Kong Hee Yong throughout their third game and neither pair led by more than 2 points from start to finish. There was even symmetry in the match points as each pair had four, losing one at a time until the Thais won on their fourth attempt.  It was their first title since the won the very first title in the new BWF World Tour, at the 2018 Thailand Masters. Korea loses 4, but Sung wins her 4th.

Korea was off to a bad start
The day had got off to a dismal start for Korea.  Seo Seung Jae had won the mixed title here back in 2017, the same day his partner Chae Yoo Jung won the women’s doubles title.  They were slim favourites to take the title today but Hong Kong’s Tang Chun Man / Tse Ying Suet were having none of that. After winning the opening game narrowly, Tang and Tse ran roughshod over the Korean game plan in the second game.  Tang leapt high and rained down steep smashes and drops and the Koreans were repeatedly forced to block high into Tse’s waiting racquet at the net and the 2nd seeds never looked capable of turning the match around in their favour.