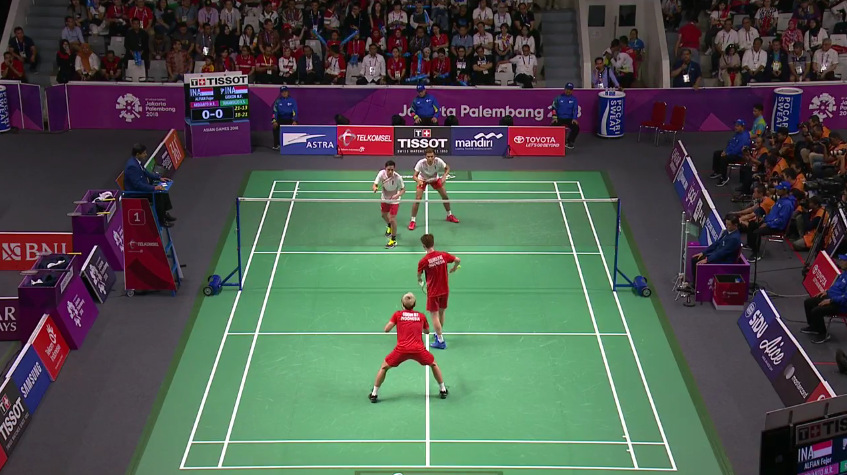 We already knew that Indonesia would take silver and gold in men’s double as their two pairs both qualified for the final yesterday. How they would decide the medals between them would be interesting to see. Would the favorites or the underdogs succeed?

Marcus Fernaldi Gideon and Kevin Sanjaya Sukamuljo – a.k.a. the Minions – have been ranked number 1 in the world for a long time and were top seeded at the recent World Championships in Nanjing. Here they failed to deliver though as they were eliminated in the round of 16 by the later silver medalists Takeshi Kamura and Keigo Sonoda from Japan. Now it was time to set things straight. They were in the Asian Games final.

Opponents of the day were compatriots Fajar Alfian and Muhammad Rian Ardianto who got a great win yesterday as they sent out the World Champions Li Junhui and Liu Yuchen from China. Ranked 9 in the world and being down 0-1 head-to-head with Gideon and Sukamuljo, the unseeded Indonesian pair had to take the role as underdogs. But it was the underdogs who got the best start in the chase for gold medals…

In a first game where Gideon and Sukamuljo didn’t seem to be ready at all, Fajar Alfian and Muhammad Rian Ardianto took control of the match from the very first point. At no point during the game the two underdogs left the lead to their opponents. Gideon and Sukamuljo did come as close as 10-11 at interval but little did it help as their unseeded compatriots rocketed off and bagged first game 21-13. An amazing start for the two unseeded players.

And they continued being superior into the second game. However, after 7 minutes it was Marcus Gideon and Kevin Sanjaya Sukamuljo who went to interval with an 11-9 lead and this time it was them who didn’t look back. After their shaky start they finally looked like the top pair they really are and they developed their lead to comfortable 15-11.

But then it went like it often does; a few good points from Alfian and Ardianto let the two back into the game. They reduced the gap to just one point at 16-17 as well as 18-19. They didn’t manage to take the game though. On their first match point at 20-18 the Minions forced the match into a third decisive game. They really gave their home spectators something for their money today.

The beginning of third game made most people think that now it was over for Fajar Alfian and Muhammad Rian Ardianto. The top seeded duo went full speed into the decisive game and was up 5-1 after just 3 minutes and 8-5 moments later. But Alfian and Ardianto managed to convert this into 11-8 for them at interval and side change with six consecutive points. Things had definitely turned around now.

Now Gideon and Sukamuljo were struggling – again – and they had to watch out that their compatriots didn’t run away from them now. Down 10-14 the world number 1 knew it was about time to gain control of the match again but Alfian and Ardianto had them where they wanted them. The unseeded duo increased their lead to 16-11. Would they make it or would the favorites strike back?

The favorites reduced the gap to three points but then Sukamuljo made a too short serve to give Alfian and Ardianto an 18-14 lead. Things were definitely getting anxious now, especially as Gideon and Sukamuljo managed to strike back at 19-19. We were up for a very close finish of the match for gold now. Next point would give one of the two pairs match point.

And it was Alfian and Ardianto who got the first match point. Shooting the shuttle into the net didn’t help them much though and moments later it was the Minions who had their first match point at 21-20. But it wasn’t over. It was all even once again at 21-21.

Another match point for Gideon and Sukamuljo at 22-21 didn’t help either as they were smashed out to make it 22-22. Then followed the most insane rally of the match as Sukamuljo suddenly ran off court to fetch a new racket and with several trick shots and crazy saves the two favorites got their third match point. This time it was enough; as Fajar Alfian placed his shot wide of the court, Marcus Fernaldi Gideon and Kevin Sanjaya Sukamuljo threw themselves on court in joy and the thousands of local spectators shouted out loud to celebrate the fantastic dram they had just witnessed.

24-22 in third games decided the Asian Games gold in favor of the Minions who thereby lived up to their role as favorites. They needed to bring everything they had to win today and must give big credit to their compatriots for the fantastic fight today.

With this result the Asian Games are over for all us badminton lovers. Big congratulations with the gold to Marcus and Kevin – and the silver to Fajar and Muhammad. Thank you for a great finish of this event!