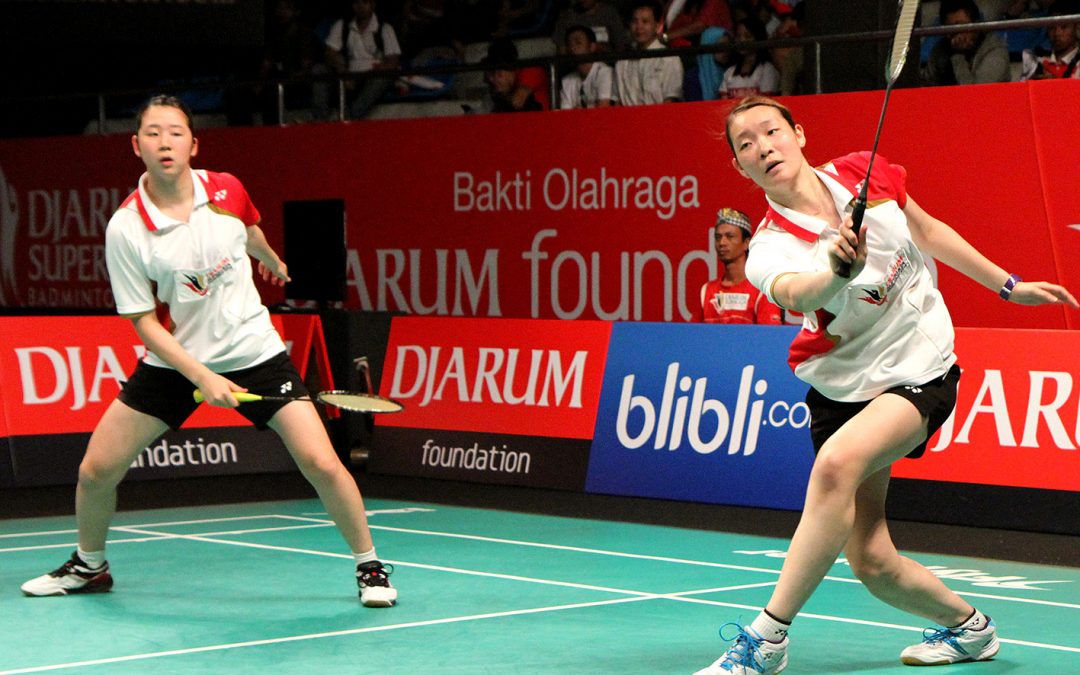 VICTOR China Open 2019, is a badminton tournament which will take place at Olympic Sports Center
Xincheng Gymnasium in Changzhou, Jiangsu, China from 17 to 22 September 2019 and has a total prize of
$1,000,000.

Men’s singles
Top-seeded is Kento Momota who is currently ranked worlds no. 1 after his triumph at the World Championships in Basel. The Japanese defended his title in style, with a crushing straight sets victory over Denmark’s Anders Antonsen 21-9. 21-3. In doing so, Momota became only the fourth player to win back-to-back titles on a short, all-Chinese list that includes Yang Yang, Lin Dan and Chen Long. Momota’s form at the tournament was certainly reflected in the scorelines. A form we hopefully will get to witness at the China Open. The 24-year-old breezed through to the title without dropping a single game, and his 21-9, 21-3 thumping of the Dane set a record for the best ever winning score at a World Championship final. In the first match he will meet Lin Dan from China. Five-time winner Lin Dan suffered his shocking defeat at the World Badminton Championships as he was beaten in the second round by India’s H.S. Prannoy but we are convinced that we will get to see a determined and focused Lin Dan in China Open. It was Lin’s earliest exit in his 12 appearances at the World Championships. He was defeated twice previously in the third round – in 2003 when he played for the first time at the age of 19 and last year in Guangzhou, China. The last time both met was in the 2018 Hong Kong Open first round where Momota defeated Lin 21-19 12-21 21-15. In addition, Rio Olympic gold medalist Chen Long also has a tough draw ahead of him with Lee Zia Jia of Malaysia who defeated Chen on the 2019 Indonesia Open second round on July 18, 2019 waiting for Chen also in the first round.

Second-seeded is Chou Tien Chen who is world no. 2. He clinched the men’s singles title at the Yonex Chinese Taipei Open 2019 after a comfortable victory over his South Korean opponent world No. 47 Heo Kwang Hee in the final in Taiwan’s capital. In the first round he will meet Khosit Phetpradab from Thailand. Lastly we have the third-seeded Shi Yuqi. Chinese singles number one, Shi Yuqi is confirmed to be absent from the 2019 China Open. Shi Yuqi’s absence was due to the condition of the injury which was still not fully recovered. Shi Yuqi reportedly had to undergo healing for about seven weeks so that he could only compete again in October. Meanwhile, the 2019 China Open will be held in mid-September (17-22 September 2019), which makes Yuqi automatically absent. Yuqi’s absence apparently provided a golden opportunity for Malaysian defender Liew Daren. After missing out on the World Championships in Basel recently, Yuqi took to Instagram last Friday to announce he was set to make a comeback at the China Open – only to reverse the decision a day later.  “Have to withdraw from China Open because my doctor said my legs were not 100% recovered. So he did not allow me to play yet. Really disappointed but had to accept the fact, ” Yuqi wrote.  Yuqi’s loss could be Daren’s gain. Sitting second to Thailand’s Suppanyu Avihingsanon in the reserve list, Daren stands a good chance of making the 32-man draw if Suppanyu decides not to take up the offer or if another player withdraw over the next two weeks. The last time Daren played at the 2013 China Open, then in Shanghai, he did well to reach the quarter-finals before losing to eventual champion Chen Long.

Daren failed to make the cut for this year’s event after he slipped from 24th to 35th in the world rankings during the entry deadline on Aug 6. It is imperative for Daren to play at the China Open, the highest-tier World Tour tournament alongside the All-England and Indonesian Open, because it offers substantial ranking points. The ranking points gained in the first round of the top-tier event itself are equivalent to reaching the quarter-finals of a fifth-tier event.“I’ve not received any news from the Badminton World Federation yet. If I get in, I will certainly go, ” said Daren, last year’s World Championships bronze medallist. “But it also depends on when I get notified, obviously the sooner, the better. If someone withdraws on the eve of the tournament, it’s going to be one tricky decision to make.”

Women’ singles
Top-seeded in this category is the Japanese Yamaguchi. World No. 1 Akane Yamaguchi suffered an upset defeat to 32nd-ranked Yeo Jia Min of Singapore 2-0 in the second round of the women’s singles at the badminton world championships. Yamaguchi is recovering from a lower back injury which may affect her game. Yamaguchi experienced pain in her lower back after winning back-to-back titles at the Indonesia Open and Japan Open last month. The injury forced her to miss significant amounts of practice before the national team gathered for training camp. “I haven’t been able to practice enough so I lacked speed. I let my opponent take control of the match and I couldn’t get into my rhythm,” the 22-year-old Japanese said. “As the top seed and top rank, I should be playing better and showing I’m a capable player,” she said. In the first round she will meet Russia’s Evgeniya Kosetskaya.

Nozomi Okuhara who finished runner-up at last week’s World Championships will set up a blockbuster women’s singles first round clash with Carolina Marin of Spain who will make her return after rupturing her anterior cruciate ligament during the Indonesia Masters final against India’s Saina Nehwal on Jan 27, 2019. It’s been a long and arduous road back, but nothing the gritty and determined Spaniard could not achieve. In March, she told BWF: “When I heard that I’d broken my ACL, I was really sad. I was crying. Then I told myself ‘It’s ok. These things happen’, so now I need to think positively. It’s going to be a long road to recovery and (I need) to be patient.” She is currently ranked No.26 in the world, a drop of 24 places from her peak ranking of No.2 before her enforced seven-month layoff. While ensuring her place in Tokyo to defend her Olympic crown is her long-term goal, getting back to peak playing condition and challenging on the HSBC BWF World Tour is the immediate priority. The four-time European champion also expressed delight at Sindhu’s recent success. “She deserves it. She won silver medals in a lot of tournaments and right when I am not there is when she does it (wins gold). So, we will see what happens at the upcoming tournaments,” said Marin. Reigning women’s singles World Champion PV Sindhu also faces a challenging draw at China Open as she will open against China’s London Olympic Champion Li Xuerui. Sindhu will go into the contest with a 3-3 record against the local girl but won the last time they played at the Indonesia Masters in January. “Sindhu will be flying out on September 14 for China,” her father PV Ramana said from Hyderabad after their short visit to Tirupati. The China Open is one of the three Super 1000 (highest tier) tournaments on the BWF World Tour which Sindhu won in 2016.

Second-seeded is Chinese Taipei’s Tai Tzu Ying who is currently ranked world no. 4. She will in the first round meet the Malaysian Soniia Cheah. Soniia Cheah said she considers herself a work in progress, believing that constant self-improvement will pay dividends.  The Malaysian women singles shuttler’s best result after 13 tournaments this year was a quarter-final appearance at the Thailand Open last month. But there were many positives to the 26-year-old’s performance this year, including wins over China’s He Bing Jiao and former world number one Li Xue Rui. Those victories in itself are motivation for her as she gears up for the China Open and Korea Open in September.

Men’s doubles
World no. 1 men’s doubles pair Marcus Fernaldi Gideon/ Kevin Sanjasya Sukamuljo will face a significant hurdle in the first round as they will meet Takurp Hoki/ Yugo Kobayashi of Japan who have been in top form as they beat a several top men’s doubles pair to advance to last week’s World Championships final. As is known, Marcus / Kevin fared badly in the 2019 World Championship. They had to leave early in the second round due to losing to Choi Sol-Gyu / Seo Seung-Jae (South Korea). Reflecting on the nine meetings between Marcus / Kevin and Hoki / Kobayashi, the Indonesian couple always won. If the Minions – the name Marcus / Kevin is able to qualify for the second round, there is a possibility of re-meeting with his conqueror at the 2019 World Championship. From the drawing also, Marcus / Kevin could also meet with the couple Mohammad Ahsan / Hendra Setiawan in the final party. With notes, both of them smoothly won every match until the semifinals. Ahsan / Hendra is in the bottom half drawing, in contrast to The Minions in the top half drawing.

In 2019, Marcus Fernaldi Gideon / Kevin Sanjaya Sukamuljo and Mohammad Ahsan / Hendra Setiawan have met three times in the final. Of the three finals at the 2019 Masters Indonesia, 2019 Indonesia Open, and Japan Open 2019, Marcus / Kevin defeated Ahsan / Hendra. Nevertheless, the possibility of the All Indonesian Final volume 4 men’s doubles number could occur at the 2019 China Open. Setiawan’s overall fourth title made him the oldest-ever winner of a World Championships gold medal – particularly significant as the ‘Daddies’ had split after the Rio Olympics and spent a year with other partners.

Women’s doubles
Top seeded are the women’s doubles pair Wakana Nagahara and Mayu Matsumoto who became the first Japanese to repeat as badminton world champions this year. They are currently ranked worlds no. 1 and will in the first round meet Dong Wenjing/Feng Xueying from China. Second-seeded is Matsutomo and Takahashi who is currently ranked world’s no. 3. Ayaka Takahashi and Misaki Matsutomo, who won the women’s doubles for Japan’s first Olympic gold in badminton in Rio de Janeiro, suffered a shock defeat on the first day of the All England Open Badminton Championships earlier this year. In addition, at the World Championships the pair met Du Yue/Li Yin Hui in the Quarterfinals. The match will be remembered as one of the longest ever, stretching over two hours. Li Yin Hui repeatedly suffered cramps in the third and was tended to; the Japanese somehow were unable to capitalise. From 9-all in the third, neither side manage a lead of over a point, until the Chinese finally broke away after 23-all and saving one match point. The score: 23-25 21-18 25-23. Matsutomo and Takahashi will in the first round meet Wenmei/Zheng Yu from China.

Mixed doubles
Top-seeded are Zheng Si Wei and Huang Ya Qiong from China who lately became the world champions in the mixed doubles. Few pairs have beaten Zheng Si Wei and Huang Ya Qiong over the last two years. Among these pairs are Hafiz Faizal/Gloria Emanuelle Widjaja, Yuta Watanabe/Arisa Higashino and Dechapol Puavaranukroh/Sapsiree Taerattanachai. It was interesting, therefore, that the defending champions were to face all three pairs in their campaign – but they ran through their stiffest opposition barely breaking a sweat. The last time China won only one gold medal at the worlds was in 1993 and 1995, but on both occasions, they still had another silver to boost their haul. This time, they captured only four more bronze (there were no third-place play-offs, both losing semi-finalists being awarded bronze). They will meet Nagahara and Hoki from Japan in the first round. Second-seeded in this category is Wang Yi Lyu and Huang Dong Ping from China also. They will meet Gondo and Kurihara from Japan.

Get a full overview of the draws here