Thailand Masters doubles: Can local favorites do it again? 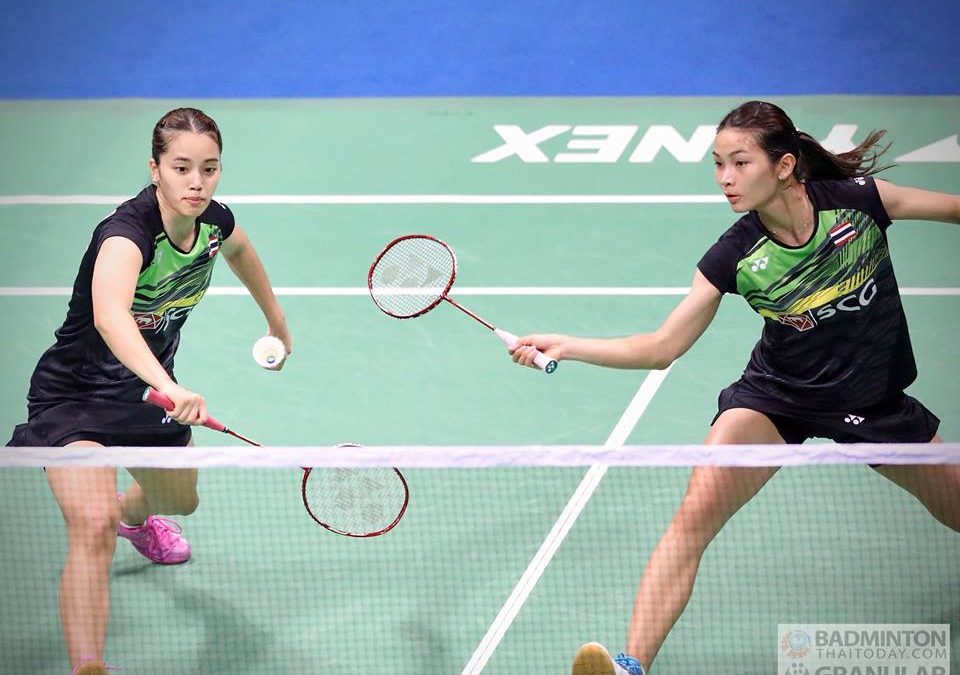 The first tournament of 2019 is the Princess Sirivannavari Thailand Masters, which kicks off tomorrow. The local spectators in Bangkok will do everything in their power to bring glory again to the local top pair on women’s double.

The Bangkok based World Tour Super 300 tournament has USD 150,000 in prize money. Thailand’s top women’s double pair – Jongkolphan Kititharakul and Rawinda Prajongjai – is ready to defend their title from last, and so are the 2018 winners in mixed double, Chan Peng Soon and Goh Liu Ying from Malaysia.

Kititharakul and Prajongjai who rank 8 in the world are facing Indonesian opponents in first round. Indonesia and Thailand are actually the two countries with most entries in the women’s double category this year; they have five and a half pairs each – one pair consists of Kittipak Dubthuk from Thailand and Rusydina Antardayu Riodingin from Indonesia.

The top Thai duo is big favorite on home ground this week but they still have to bring out full concentration to go all the way like they did last year. On the way to the final Jongkolphan Kititharakul and Rawinda Prajongjai could run into other seeded pairs like Emilie Lefel/Anne Tran (4), Ekaterina Bolotova/Alina Davletova (7) and Setyana Mapasa/Gronya Somerville (8) as well as one of the runners-up from last year, Ni Ketut Mahadewi Istarani who plays with Rizki Amelia Pradipta this year.

In the bottom half of the draw 13-ranked Nami Matsuyama and Chiharu Shida must overcome Chayanit Chaladchalam/Phataimas Muenwong (3), Li Wenmei/Zheng Yu (5) and Selena Piek/Cheryl Seinen (6) before they live up to their seeding.

Read about the singles: 2019 kicks off in Thailand

Malaysia’s best men’s double pair, Goh V. Shem and Tan Wee Kiong who recently announced they are leaving the Malaysian national team, are top seeded in Thailand Masters this week. They will be up against Thailand’s mixed double specialist Dechapol Puavaranukroh and partner Kittinupong Kedren in first round. In the quarterfinal Goh and Tan could very well face compatriots Ong Yew Sin and Teo Ee Yi who are seeded 6.

In the bottom half of the draw two Malaysian pairs have the pleasure of each other in first round. Second seeded Aaron Chia and Wooi Yik Soh run into Chooi Kah Ming and Low Juan Shen in their first step towards success in Bangkok. Malaysia has no less than six pairs in the men’s double category, four of which are seeded, so the odds could very well be in Malaysia’s favor this week. But as we know, it doesn’t always go as predicted…

Finalists from 2018 are top seeded

Last year’s final in mixed double was a battle between the two top seeded pairs from this year; Chan Peng Soon and Goh Liu Ying won in three games last year against Dechapol Puavaranukroh and Sapsiree Taerattanachai. Surely the two Thais are up for revenge this year and winning a title in front of their home crowd would be the a very satisfying end of the week for them.

Chan and Goh are drawn in the top half with 4th seeded Akbar Bintang Cahyono and Winny Oktavina Kandow, 7th seeded compatriots Chen Tang Jie and Yen Wei Peck, and finally 8th seeded Tang Chun Man and Ng Tsz Yau. Tang usually played with Ying Suet Tse but has a new partner this and next week. He will partner up with Ying again at the Indonesia Masters at the end of January.

Below you can see the first round matches for the seeded entries in the three double categories: