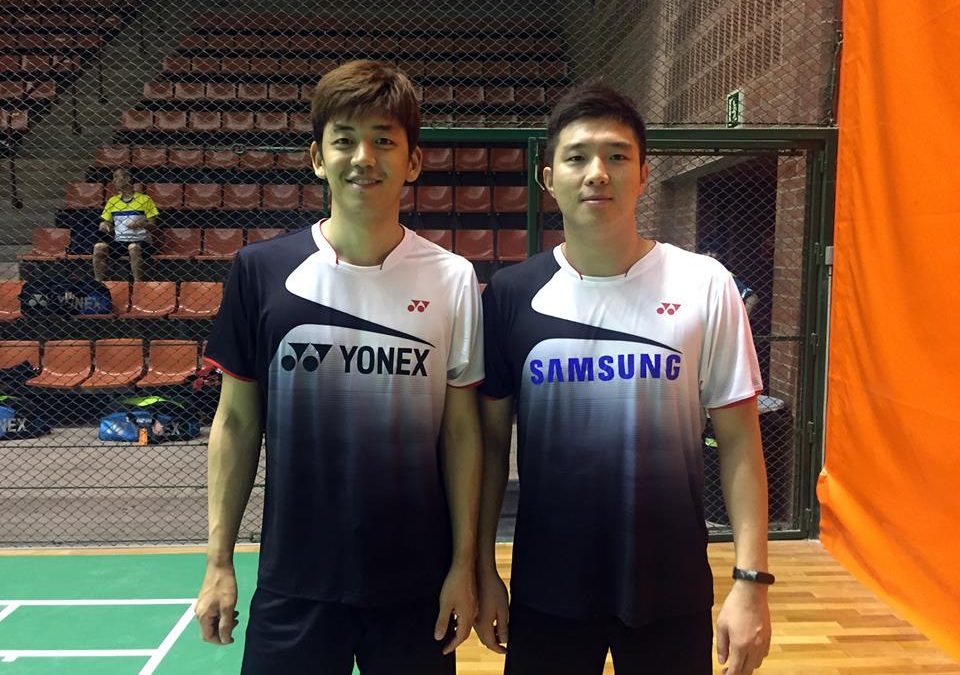 These are the highlights to bring forward from the semifinals of Spain Masters this Saturday in Barcelona. Legend Lee Yong Dae who partners with Kim Gi Jung this week opened the day against two Malaysians.

It was up to Chen Tang Jie and Wei Chong Man from Malaysia to prevent legend Lee Yong Dae an entry into the men’s double final in his comeback tournament. Lee who partners up with Kim Gi Jung had won all their matches in straight games and the Koreans were full of self-confidence when entering the court today.

In a first game where Chen and Wei were struggling a lot from first point, it was one-way traffic from Lee and Kim. The Korean duo quickly earned a 4-0 lead and they didn’t look back since then. At 11-6 a series of six consecutive points led to a very comfortable win of 21-11 for Lee and Kim in first game.

Chen Tang Jie and Wei Chong Man managed to step up in second game where they were leading with a couple of points in the beginning. Once again the Koreans took control though and from 6-6 second game belonged to Lee and Kim. They won 21-17 and therefore qualified for the final in their first tournament together.

Their opponents for tomorrow’s final were to be found between Bodin Isara and Maneepong Jongjit from Thailand and Akira Koga and Taichi Saito from Japan. The Thais were favorites but the Japanese wanted it differently as they took first game 21-19 after having had six game points.

During the rest of the match it was obvious to see who the better pair was though. Isara and Jongjit added speed to their game and after 2-2 in each of second and third game the Thais didn’t look back at all. With 21-8 21-12 it will therefore be a final between Korea and Thailand in men’s double tomorrow.

Big surprise on the way

It’s still under a month ago that Mayu Matsumoto and Wakana Nagahara from Japan claimed the gold medals at the World Championships in China. Today they were up against Denmark’s Maiken Fruergaard and Sara Thygesen, ranked 21 in the world, and the two World Champions were big favorites.

But the Danes started off very well and did not seem to have too much respect for their opponents. They played their chances and surprisingly bagged first game 21-17. As second game was very close all the way up to 13-12 for Matsumoto and Nagahara, some spectators had begun to speculate if a big surprise was about to happen right in front of them.

Six consecutive points for the Japanese duo postponed an eventual surprise though and the World Champions forced the match into a third decisive game with 21-16. From then there was no doubt who was the stronger pair on court. In a third game where Fruergaard and Thygesen were not leading any moment at all, Mayu Matsumoto and Wakana Nagahara redeemed their expected tickets for the final with a secure 21-12 in third game.

They will face second seeded compatriots Ayako Sakuramoto and Yukiko Takahata in the final tomorrow. Sakuramoto and Takahata defeated another Japanese pair in the semifinal – Misato Aratama and Akane Watanabe – in straight games.

Japan is also represented in the women’s single final tomorrow as Minatsu Mitani had no major problems in defeating Kirsty Gilmour from Scotland in the semifinal today. Mitani won 21-15 21-16 and will be up against a Danish opponent in the final.

And we witnessed a big drama before that Danish opponent was found. Training partners Mia Blichfeldt, seeded 3, and Line Kjærsfeldt, seeded 7, faced each other in their only second international encounter in the other women’s single semifinal. Kjærsfeldt had won the first encounter in straight games at Swedish Masters two and a half year ago.

The two girls who know each other extremely well from training started off very evenly in a match that lasted 76 minutes. Only twice there was a gap of more than two points in first game – second time was when Mia Blichfeldt grabbed it 21-18.

Second game was slightly different, however still extremely close. Line Kjærsfeldt was few steps ahead of Blichfeldt from the beginning and even had a 6-point lead half way through the game. Down 9-15 Blichfeldt almost managed to close the gap but at 19-20 she could see Kjærsfeldt take the game on her third game point; 21-19 and ready for third game.

Then came the drama. At first it seemed that Mia Blichfeldt had no more to come with – Kjærsfeldt was quickly up 10-3 and things looked very good for her. But at interval it was 11-10 for Blichfeldt who won eight consecutive points to shake her opponent and friend.

Another five points in a row didn’t help Line Kjærsfeldt much as she was caught up with again at 17-17. Neither did it that she had two match points at 20-18. Mia Blichfeldt kept on coming back and closed the extremely close match with 22-20 in third game to qualify for her second international final of the year. At the Orleans Masters in France in March/April Blichfeldt lost the final against Shiori Saito from Japan. Tomorrow she’ll have the chance to get even with the Japanese women’s singles when she battles with Minatsu Mitani for the Spain Masters title.