Spain Masters in Barcelona: Asians make hattrick of the day 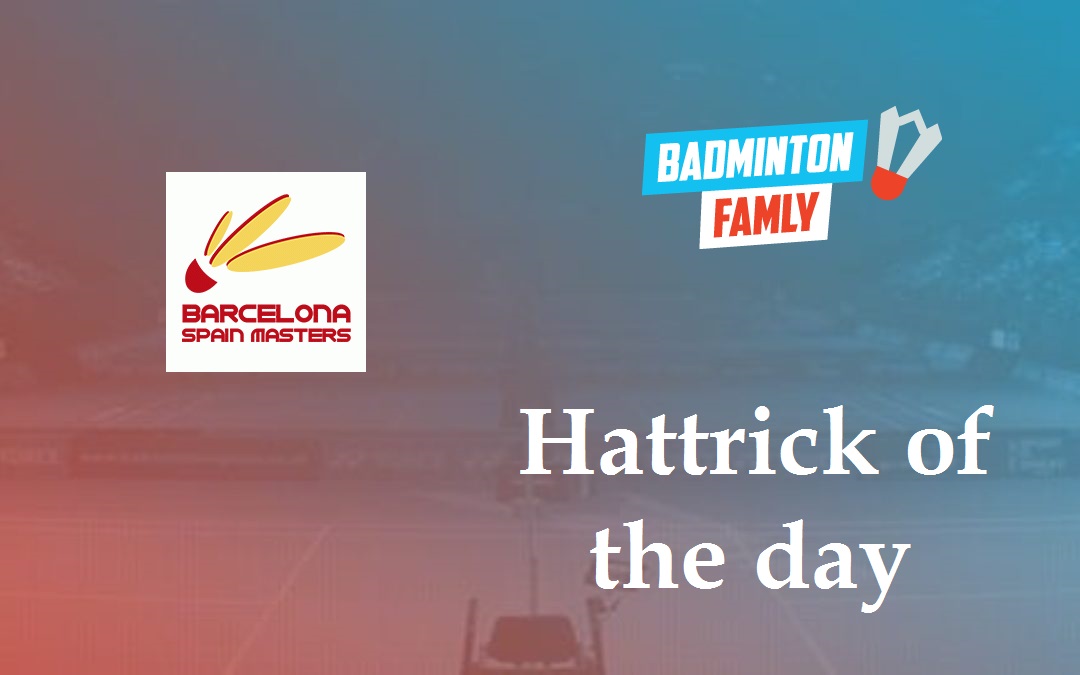 Since the Spain Masters is played in the football-crazy city of Barcelona we stay in football terms today. Hattrick of the day was delivered by Thailand who was represented in three matches in Spain today.

Suppanyu Avihingsanon is top seeded in men’s single and he was the first of the Thais who was in action today. The Thai player was up against Thomas Rouxel from France and it was the French who had won the only previous encounter between the two. It was five years ago they played last time though and today Avihingsanon is ranked 31 against Rouxel’s number 62 in the world.

The two players followed each other pretty much all the way through three quarters of the match. Thomas Rouxel was one small step ahead of the Thai up to 15-14 where Suppanyu Avihingsanon scored five points in a row. The French nearly caught up with him again but had to accept a loss of 19-21 in first game. In second game the scenario was almost the same. The match was extremely close up to 12-11 for Avihingsanon who then once again won five consecutive points. Rouxel managed to reduce the gap to two points but little did it help. The Thai won second game 21-16. A funny detail is that the previous encounter between the two players finished with nearly same score for Rouxel: He won 21-19 21-17 back in 2013.

Suppanyu Avihingsanon is now through to the quarterfinal where he is facing 7 seeded Misha Zilberman from Israel. Zilberman has had two matches of more than one hour each as he won in three games against Subhankar Dey from India yesterday and also in three games against Rasmus Messerschmidt from Denmark today. This will be the first encounter between Avihingsanon and Zilberman.

Longest match of the day

Second match of the day with players from Thailand was in women’s single where Busanan Ongbamrungphan was the favorite against Ayumi Mine from Japan. The Thai is seeded 5 in Barcelona and ranks as number 23 in the world while her opponent is unseeded and ranked 69. Just like in the men’s single mentioned above, it was the lower ranked player who won the only previous encounter between the two. This was also many years ago though; we have to go back to March 2012.

Ongbamrungphan and Mine really got value for their money today. They spent no less than 84 minutes on court before they had found a winner. The Thai started off best but with the help of first five consecutive points, then four more moments later, Ayumi Mine bagged first game 21-17. The beginning of second game contained the closest period of the match as there was no more than one point difference between the two players from 2-2 and up to 12-12. But an extreme finish from Busanan Ongbamrungphan gave her the game 21-12 and forced the match into a third decisive game.

Mine quickly got a lead of 4-0 in third game and one could fear that the Thai didn’t have more energy left. But she did. Ongbamrungphan closed the gap and the two were once again very close up to 17-16. It looked like a nerve-wrecking finish of the long match but it didn’t end like that. Busanan Ongbamrungphan closed the match with four consecutive points and secured her spot in the quarterfinal with 21-17. In the quarterfinal she will have to find her highest level as she faces the number 3 seeded of the tournament, Mia Blichfeldt from Denmark. Blichfeldt won her match today in straight games against Canada’s Brittany Tam and the Dane’s legs should not be as tired as the Thai’s after today. Let’s see tomorrow!

To complete the hattrick for Thailand, men’s double pair Bodin Isara and Maneepong Jongjit would have to win their match against Konstantin Abramov and Alexandr Zinchenko from Russia. The Russians were favorites due to their ranking as number 54 against number 83 for the Thais. It was the first ever encounter between the two pairs.

First game was a close affair with Bodin Isara and Maneepong Jongjit being ahead with a few points all the way. The Russians were close to catching up on a 19-15 lead for the Thais but lost anyway with 18-21. And first game seemed to be what Abramov and Zinchenko had energy for today. They quickly fell so far behind in second game that it seemed unlikely that they would win the match. 6-1 and 14-3 was converted into a secure victory of 21-8 for Isara and Jongjit who therefore completed the Thai hattrick with glamour.

Thailand had three matches on their program today and they won all three. In tomorrow’s quarterfinal Bodin Isara and Maneepong Jongjit will be up against Danish duo Jeppe Bay and Mikkel Mikkelsen. The Danes got a very good win against Jacco Arends and Ruben Jille from the Netherlands today.

Quick news from the other matches…

Click here to see all the results from today