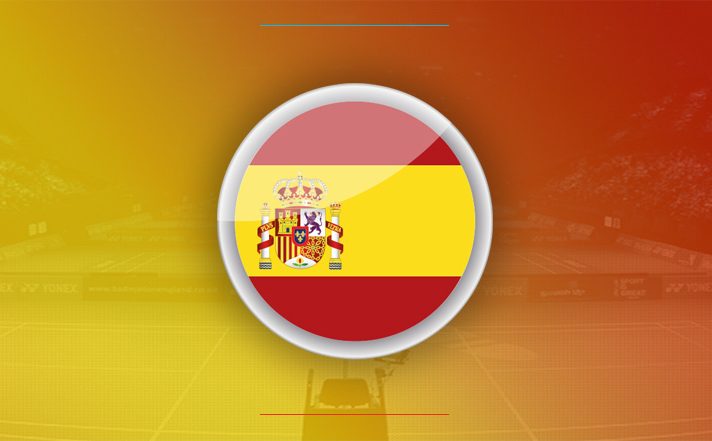 Legend men’s double player Lee Yong Dae who recently returned to the badminton circuit partnered up with Kim Gi Jung to compete in Spain Masters this week in Barcelona. So far the two haven’t lost a single game in their debut tournament and they are now ready for the semifinal.

The Korean legend who temporarily stopped his career after winning Korea Open with Yoo Yeon Seong in 2016 returned for one tournament in 2017 – Korea Open again – before making another comeback for this week’s Spain Masters in Barcelona. This time he partners up with Kim Gi Jung and the success for the Korean duo is already there.

Lee and Kim won their first and second round matches in two games each before facing Maxime Briot and Kenji Lovang from France in the quarterfinal today. The match was Briot and Lovang’s first at Spain Masters after they won on walkovers in both first and second round after withdrawals from England’s Peter Briggs and Tom Wolfenden and Denmark’s Mathias Boe and Carsten Mogensen. In the quarterfinal today there was an obvious difference in the level of the two pairs on court.

After a slow start with points for both sides the Koreans exploded and bagged first game fairly quickly with 21-11. In second game the French stepped up but could still not do much against Lee and Kim who kept a gap of 3-4 points in their own favor most of the way. They won 21-17 and are now ready for Malaysians Chen Tang Jie and Wei Chong Man in the semifinal tomorrow.

Chen and Wei won in three games against Danish duo Frederik Colberg and Joachim Fischer Nielsen. In first game the Malaysians were in control but things turned around in second so things were to be decided in a third decisive game. Here things were even until 7-7 where Chen and Wei gained a comfortable 5-point lead, which the Danes never managed to catch up with. The Malaysians won third game 21-15.

It’s the Asians who dominate men’s double in Spain as the other semifinal tomorrow will also be between two Asian couples. Bodin Isara and Maneepong Jongjit from Thailand won their quarterfinal against Danes Jeppe Bay and Mikkel Mikkelsen in straight games today. Tomorrow they will face Akira Koga and Taichi Saito from Japan who had to struggle a bit today before they had secured their ticket for tomorrow.

Koga and Saito were up against a pair from Ireland, Joshua Magee and Paul Reynolds, who had entered the quarterfinal on the same conditions as the French; they had two walkovers in the first two rounds. And the Irish really forced the Japanese to pull out their best as they took first game 21-19 after having led most of the way. In an extremely close second game where the two pairs followed each other all the way to 22-22 it could have gone whatever way it would. But two points for Koga and Saito seemed to puncture the Irish duo completely.

Third game was one-way traffic from the Japanese side. Akira Koga and Taichi Saito didn’t look back from 2-2 and won comfortably with 21-9.

Denmark and Japan sure to be in the final

Already before the semifinals we know that Denmark and Japan will at least have one spot in the finals on Sunday. Training partners Mia Blichfeldt and Line Kjærsfeldt will be up against each other in one of the women’s single semifinals tomorrow and in women’s double Japan has three pairs represented in the semis.

Blichfeldt got her first even win against Thailand’s Busanan Ongbamrungphan today in the fourth encounter between the two. The Thai had won all previous three encounters in straight games – today it was the Danish girl’s turn as she won the quarterfinal 21-18 21-17. Kjærsfeldt won her quarterfinal with the exact same score in opposite order; 21-17 21-18 against Yvonne Li from Germany.

In women’s double unseeded Japanese Misato Aratama and Akane Watanabe faces compatriots Ayako Sakuramoto and Yukiko Takahata in one of the semifinals tomorrow. Sakuramoto and Takahata are second seeded and favorites to pass through to the final on Sunday. Denmark is the country who will try to spoil the Japanese success in Barcelona with Maiken Fruergaard and Sara Thygesen being ready for the third Japanese pair of the four represented in the semifinals. The Danes have to play their absolutely best though as it’s the World Champions, Mayu Matsumoto and Wakana Nagahara, who they are facing tomorrow. It will be one of the Danish pair’s biggest win if they can eliminate the World Champions tomorrow.

And no, there were no hattricks in Barcelona today…