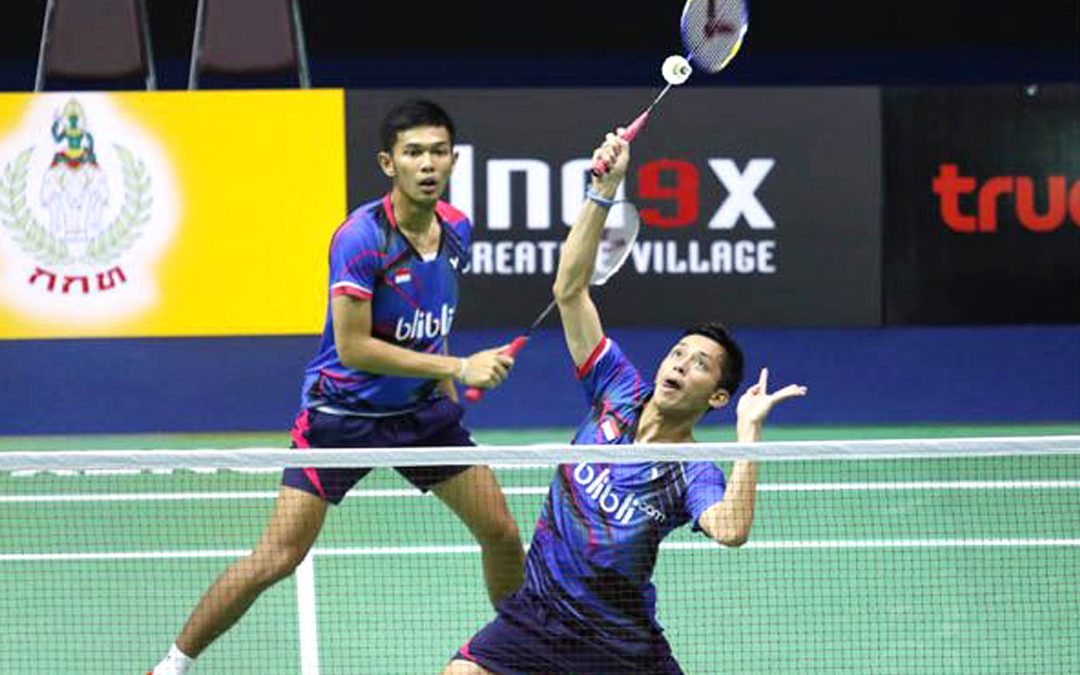 Men’s singles
Shesar Hiren Rhustavito failed to step into the semifinals of the 2019 Korean Open. The men’s singles ranked 27th in the world were beaten by the 2nd seed from Taiwan, Chou Tien Chen in the quarter-finals. Shesar Hiren surrendered in straight sets with a score of 21-18 and 21-9 within 39 minutes. The beginning of the first game Shesar Hiren appeared under pressure. Although Shesar had reversed the position 7-6, Chou Tien Chen returned to lead 8-11 at the interval. After the break Shesar returned to equalize 12-12. Nevertheless, Tien Chen managed to stay away through a 14-19 advantage. The first game was closed with a score of 18-21 for the Taiwanese men’s singles. Shesar still can’t get up in the second game. Although the game was tight at the beginning of the game when the scoreboard showed a draw 2-2 and 3-3, but he began scattered 4-8. Entering a pause, the margin points widened 6-11. The final half of the second game has practically belonged to Chou Tien Chen. The acquisition of the world’s number 2 men’s singles points skyrocketed 7-17. The match ended with a score of 9-21 for the stronghold of Taiwan. Head to head scores of both players became 0-2 for Chou Tien Chen.

The semi-finals at the Korea Open will also be without Danish participation. Jan Ø. Jørgensen had set balls at 20-19 and 22-21, but they missed the 31-year-old Dane, who then went all the way down in the quarterfinals second set against the 33-year-old Indian Kashyap Parupalli. That’s why the world number 30 won over number 23 with 24-22, 21-8, and Parupalli will meet in the semi-final the sworn Japanese world champion, Kento Momota. On Thursday, Kashyap outclassed Malaysia’s Daren Liew 21-17, 11-21, 21-12 in a second-round match. Kashyap is the only Indian left in the Korea Open after PV Sindhu, Saina Nehwal, and Sai Praneeth were knocked out of the tournament.

Men’s singles top seed Kento Momota stayed in the hunt for his third straight title, having plenty in reserve as he beat Malaysia’s Lee Zii Jia 21-15 21-19. The world champion played well within himself, particularly in the second game, as he sat back and challenged Lee to take the initiative. Just when the Malaysian was on the ascendant, Momota dialled up the pace and picked his spot to coast to a fairly comfortable victory.

Women’s singles
Michelle Li’s recent form continued to hold, as she beat fourth seed Nozomi Okuhara to enter the semifinals. Li’s win was the first over her Japanese opponent in four years, during which she suffered five straight defeats. This was Li’s second top-tier semifinal recently after the Japan Open. The Canadian staged a gallant fightback after trailing most of the way in the third game. She caught up at 17 and then pulled ahead after 18-all to win the match on the 72nd minute. In the other half, Ratchanok Intanon avenged last week’s defeat at the China Open to Sayaka Takahashi, getting the better of her Japanese opponent 21-9 23-21. After a first game rout, Takahashi turned on her attacking game in the second and challenged Intanon. The Thai was in frequently in trouble and had to dig deep; Takahashi led all the way but was let down by the inconsistency of her smashes, which often found the net. She had three opportunities to take the game, but Intanon responded brilliantly. A stunning cross net shot and a sharp clip that caught the line helped her on the way as she wriggled out of the tight spot to book her semifinal place.

The Minions are out in the men’s doubles
The semifinal round ticket was obtained by Fajar Alfian / Muhammad Rian Ardianto after conquering fellow countryman, Marcus Fernaldi Gideon / Kevin Sanjaya Sukamuljo, 22-20, 21-17. Through this victory, Fajar Alfian / Muhammad Rian Ardianto improved the record of meeting with Marcus Fernaldi Gideon / Kevin Sanjaya Sukamuljo to 2-5. Tight game immediately presented since the beginning of the first game until the position 6-6. Marcus / Kevin went further 9-6 after scoring three consecutive points. Fajar / Rian then approaches 8-9. However, Marcus / Kevin opened the distance and closed at 11-8 intervals. arcus / Kevin approached 18-19 and again recorded a draw to score a game point 20-19. Fajar / Rian then forced a setting conflict. After going through three deuces, Fajar / Rian made sure this game became theirs.

Ousted the defending champions in mixed doubles
Rinov Rivaldy and Pitha Haningtyas Mentari ousted mixed doubles defending champions He Jiting / Du Yue in three very close games to start off quarter-finals day at the Korea Open. Both young pairs won major senior titles within a year of claiming junior honours but the edge there went to He Jiting / Du Yue of China, who collected two Grand Prix Gold titles in the 12 months after they won their junior title in Spain in November 2016. Then last, year, just a week before He and Du collected their first ever Super 500 title here in Korea, Rinov Rivaldy and Pitha Haningtyas Mentari (pictured) made their home Super 100 event their first major title on the senior circuit.  Since then, the Indonesian youngsters have reached two Super 300 finals but this Korea Open is only their second quarter-final appearance at the Super 500 level.

All three games were perilously close by the end but there were some big swings in fortunes for each side.  The Indonesians managed a promising 19-16 lead in the first game, only to be reeled in again and again and they only managed to take it on their 6th game point. The Chinese completely took control in the second and looked like they had completely turned the match around when they were up 17-9 but Mentari was solid at the net and she and Rivaldy clawed their way back to within 1 and then saved 3 game points to tie it at 20-all.  Still, they couldn’t get out in front and although they saved two more, He/Du won 24-22 to force a deciding game. The third game was the Indonesians’ chance to look dominant but after moving in front 14-8, they also took their turn having their lead erased and from 20-17 up they blew their first 3 match point opportunities.  They held their nerve in the end, though, and never let the defending champions get in front as the finished it 22-20. “In the second game, the gap in the score was too wide,” said Mentari after the match, “so we just played like we had nothing to lose but after we caught up to them in the score, we really wanted to win and that’s why we rushed a bit and lost.  Then in the third game, we really didn’t want to let the same thing happen again so we really tried our best and we stayed strong until the end.”

Praveen Jordan / Melati Daeva Oktavianti had to stop at the quarterfinals of the 2019 Korean Open. They lost to top seed, Zheng Siwei / Huang Ya Qiong (China). Score 10-21, 18-21 marks the end of their struggle at Incheon Airport Skydome, Korea. “Earlier we lost the first game, already could not be pursued. The second game has begun to get the game, but there are still many die by themselves. By the middle of the second game it was good, but apparently still could not get it, “said Melati, reported by PBSI. “Rightly said Meli (Melati), our first game was really late. This should not have happened, because early start is important, “said Praveen. This defeat is the sixth time for Praveen / Jasmine over Zheng / Huang. This Indonesian couple apparently still could not find a formula to overcome the world number one player. “They are the number one pair with many titles. They also fit and are resilient in the field. His guy also has a good attack. We both have to hone our respective skills to be better, “Praveen said.

Get an overview of all the matches here