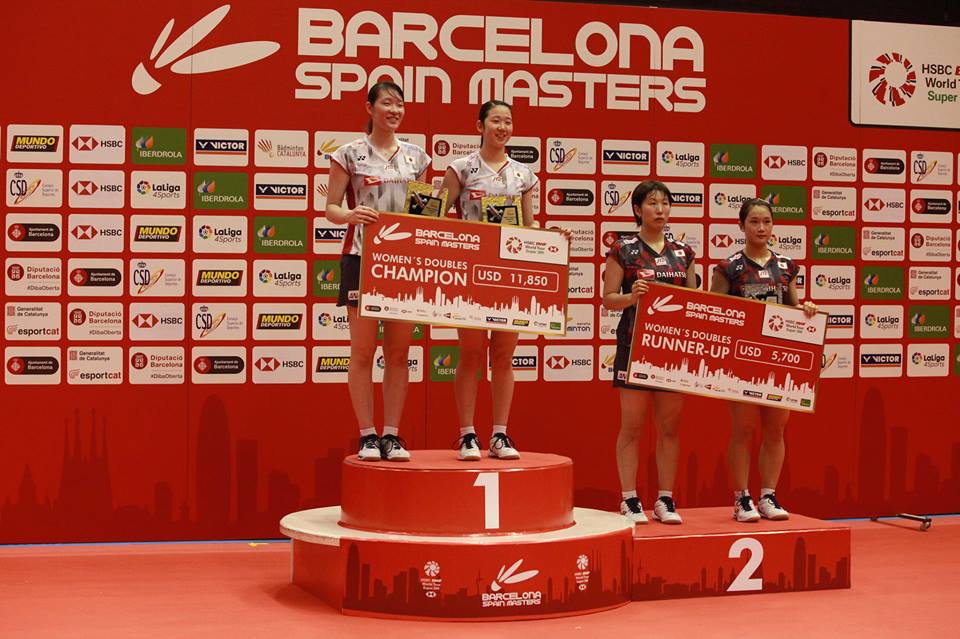 There are 28 pairs in the women’s double draw at Japan Open – 8 of the pairs are from Japan. In the world ranking updated two days ago Japan has 5 women’s double pairs in top 10. Adding the benefit of playing on home soil it will be very likely to see Japan on top of the podium after the final.

There is no doubt that Japan is ruling the women’s double category these years. They may not win absolutely everything – the recent Asian Games were won by Chen Qingchen and Jia Yifan from China – but with five pairs in top 10 and eight pairs in the draw for next week it makes sense to predict Japanese winners on Sunday in a week.

The four top seeded pairs all have a bye into second round. Top seeds are Yuki Fukushima and Sayaka Hirota who will face either Ashwini Ponnappa/Reddy N. Sikki from India or Chang Ye Na/Jung Kyung Eun from Korea in second round. The second seeds were in the final the previous two years; Misaki Matsutomo and Ayaka Takahashi. They lost in 2016 and won in 2017. First hurdle on the way to their third consecutive final will be the winners of Kim So Yeong/Kong Hee Yong, Korea, and Du Yue/Li Yinhui, China.

The Asian Games Champions from China are third seeded and will have the pleasure of either local girls Misato Aratama/Akane Watanabe or Indonesians Anggia Shitta Awanda/Ni Ketut Mahadewi Istarani in their first match. The fourth seeded pair is also from Indonesia and they have the chance of a very interesting battle with two of their compatriots in second round.

Greysia Polii and Apriyani Rahayu will face either Ayako Sakuramoto and Yukiko Takahata from Japan or their training partners Della Destiara Haris and Rizki Amelia Pradipta in second round. This is in itself a very interesting match as well between the world’s no. 10 and 11. Haris and Pradipta have shown they can compete with the very top as they reached the quarterfinal of the World Championships a month ago.

The cliché is true

Several reasons make us believe the winners of Japan Open are to be found between the four top seeded pairs but the cliché that anything can happen in sport is true. There are several other pairs who can tease the top ones.

Another local pair in Shiho Tanaka and Koharu Yonemoto is the first pair who has the power to go all the way. They are seeded 5 and were the ones to eliminate Haris and Pradipta in the quarterfinal in Nanjing. Tanaka and Yonemoto are drawn against Tang Jinhua and Yu Xiaohan in first round.

If the 6th seeded Thais, Jongkolphan Kititharakul and Rawinda Prajongjai, win their first round match against Americans Ariel and Sydney Lee they could potentially become part of an interesting clash against two compatriots in second round. The Thais are drawn to meet Supissara Paewsampran and Puttita Supajirakul in second round, however, Paewsampran and Supajirakul must eliminate Huang Dongping and Li Wenmei from China in their first match before the Thai clash will happen.

Half of the seeded pairs are from Japan

Korea’s best pair is Lee So Hee and Shin Seung Chan who are ranked 7 in the world. At Japan Open they are also seeded 7 and they are drawn against Emily Kan and Isabel Zhong from USA in first round. They will be up against the winners of a very interesting clash in second round; either the best active European pair in Bulgarian sisters Gabriela and Stefani Stoeva or local duo Naoko Fukuman and Kurumi Yonao who got bronze in Japan Open 2017.

The seeded pairs are concluded with yet another Japanese pair, Mayu Matsumoto and Wakana Nagahara, World Champions from Nanjing one month ago. The two come with a fresh title in their bags from Spain Masters last weekend and they are facing Russians Ekaterina Bolotova and Alina Davletova in first round. Matsumoto and Nagahara being seeded 8 makes Japan have no less than four seeded pairs in the women’s double category. Time will tell if that also means Japanese success when the final is played Sunday 16 September.