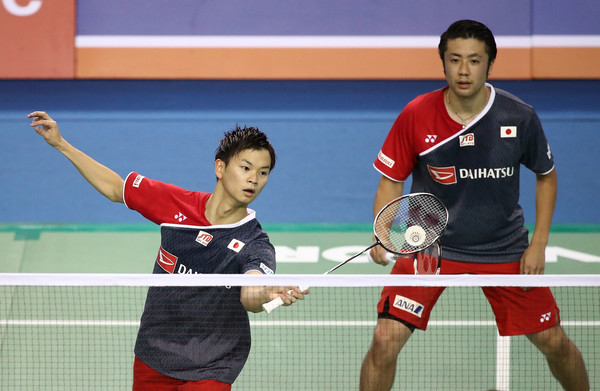 The matches in the semifinals are now over and we are one step closer to finding the ultimate champions – get an overview of today’s winners right here!

Momota advances to the finals – will meet Ginting
The Japanese star was in impressive form at the Tianhe Gymnasium in the Chinese city, as he overcame Wang Tzu Wei of Chinese Taipei in the semi-finals. Momota, who won all three of his group matches at the tournament, eased to a 21-17, 21-12 victory in the last-four tie. His reward is a meeting with Indonesia’s Anthony Sinisuka Ginting in tomorrow’s final at the season-ending event. Ginting earned a 21-15, 21-15 win over China’s Chen Long in the second men’s singles semi-final. He is enjoying a spectacular season, with the World Championships, Asia Championships and prestigious All England Open among his haul of tournament victories. Momota will be hot favourite in southern China against Ginting having defeated the Indonesian 10 times in their 14 meetings.

Disappointment for Japan in the women’s singles
There was a disappointment for Japan in the women’s singles semi-finals, after both of their players suffered defeats. Top seed Chen Yufei of China overcame Akane Yamaguchi 21-18, 21-9 in the first semi-final, while Chinese Taipei’s Tai Tzu-Ying was a 21-15, 21-18 winner against Nozomi Okuhara in the second contest. Despite some inconsistency in Tai’s second game, the Taiwanese player still found the mark on most of her attacks and held off the struggling Okuhara to prevent any chance of a late comeback. “I was mainly trying to reduce my errors,” the 25-year-old Tai said. “In my last match against her I made a lot of mistakes. Today I kept my focus. My form is getting better as I get used to the court.” The win also made their head-to-head record 7-6 in Tai’s favor. “I expect a difficult match tomorrow and I hope I continue to play well,” said Tai, who won the crown in 2014 and 2016. Tai’s opponent in the final on Sunday is world No. 2 Chen Yu Fei of China, who defeated world No. 4 Akane Yamaguchi from Japan, 21-18, 21-9 one day earlier.

Who are through in the men’s doubles?
Japan’s Hiroyuki Endo and Yuta Watanabe battled into the men’s doubles final, after they earned a 21-11, 15-21, 21-10 win over Indonesia’s Marcus Fernaldi Gideon and Kevin Sanjaya Sukamuljo. They will meet further Indonesian opposition in the final, as Mohammed Ahsan and Hendra Setiawan claimed a 21-14, 21-9 win over Chinese Taipei’s Lee Yang and Wang Chi-Lin.

Through to the finals in the women’s doubles
In the women’s doubles, China’s Chen Qingchen and Jia Yifan eased to a 21-15, 21-8 victory over South Korea’s Lee So-hee and Shin Seung-chan. The Chinese pairing will face Mayu Matsumoto and Wakana Nagahara, as the second seeds came from a game down to beat Yuki Fukushima and Sayaka 13-21, 21-17, 21-9.

Thai duo exit
Dechapol Puavaranukroh and Sapsiree Taerattanachai of Thailand fell in straight sets (21-17 21-16) to arch-rivals Wang Yi Lyu and Huang Dong Ping of China in the semi-finals of the BWF World Tour Finals on Saturday. The result sets up an all-China final on Sunday, with the defending mixed-doubles badminton champions Wang and Huang facing Zheng Si Wei and Huang Ya Qiong, who earlier avenged a group loss to Yuta Watanabe and Arisa Higashino of Japan. The Thai duo had their opportunities on Saturday – at one point enjoying a five-point cushion in the second game – but withered in the face of a ceaseless assault from Wang, who had a standout performance. Dechapol and Sapsiree were the only Thais remaining in contention at the Guangzhou event, after Ratchanok Intanon bowed out following her second successive defeat on Friday.

Get an overview of todays result here