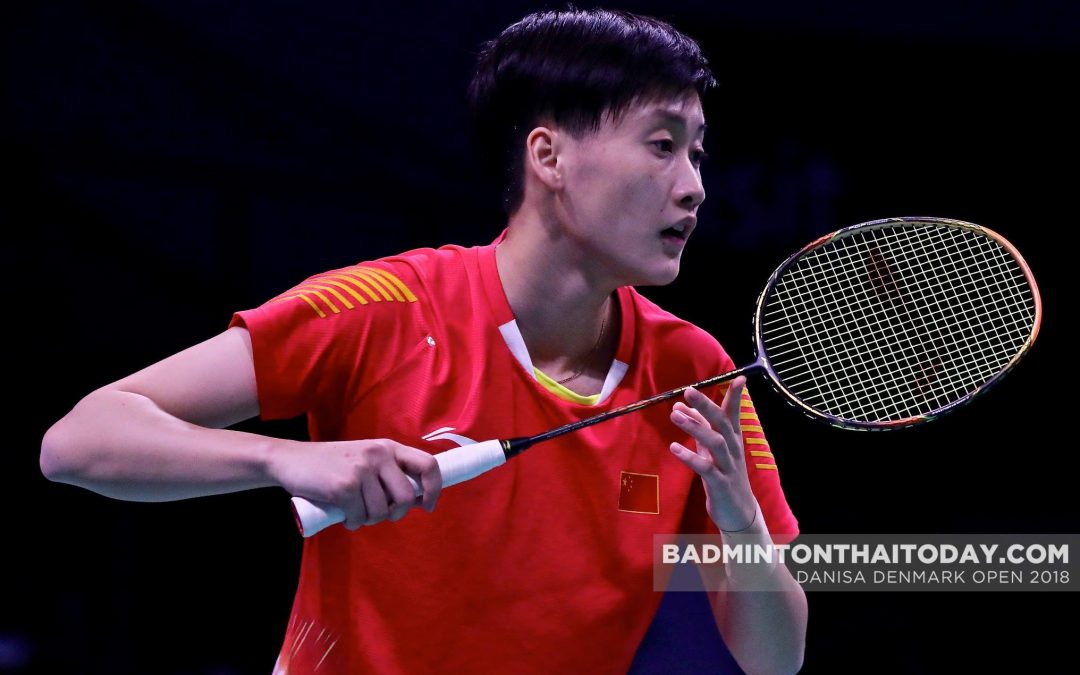 The World Tour has reached Fuzhou in China this week where the top players are competing for USD 700,000 in prize money in the Haixia Olympic Sports Center. First and second round being player, we can conclude that it’s the seeded singles have more success than the seeded doubles.

World no. 1, Kento Momota, opened this week with a top clash against Lin Dan, which he won in straight games. The Japanese continued his journey into the quarterfinals with another win against Hans-Kristian Solberg Vittinghus. Tomorrow he is facing Son Wan Ho (7) in the 9th encounter between the two; head-to-head statistics is 4-4 so far.

One unseeded against seven seeded

It could smell a bit like Snow White and the seven dwarfs – but it isn’t. It is Anders Antonsen as the only unseeded entry in the quarterfinals in men’s single against seven seeded players. He will be up against Chen Long (6) who he defeated in their first encounter in 2017. After that the Chinese has won the three other times they met so the Dane has to step up on 100% to have a chance tomorrow.

Kidambi Srikanth (5) and Chou Tien Chen (4) will compete for a semifinal against the winner of Anthony Sinisuka Ginting (8) and Shi Yuqi (2). Ginting won his second round match against compatriot Jonatan Christie in three games after the two first being settled with 22-20 to each side.

Top two is out in women’s single

With Tai Tzu Ying being out already before the Fuzhou China Open started, it’s up to all the others to settle the title between them. As second seeded Akane Yamaguchi fell short to Beiwen Zhang in second round, there are six seeded entries left for tomorrow’s quarterfinals in women’s single.

Beiwen Zhang is one of two unseeded players in the quarterfinals and she will be up against triple World Champion Carolina Marín (5). The American is actually leading 2-1 head-to-head but it’s more than five years ago the two last met. The Spaniard will surely aim to level this statistic tomorrow.

Sayaka Takahashi is the other unseeded player in the quarterfinals and she is facing her training partner and club mate from the Unisys badminton team in Japan, Nozomi Okuhara (7). The former World Champion is favorite in this match and the statistics are also on her side (4-1).

China’s two chances for a spot in the semifinals are split between He Bingjiao (8) and Chen Yufei (4). He Bingjiao defeated last week’s winner of Macau Open in her second round today, Michelle Li, and tomorrow she is facing Pusarla V. Sindhu (3). The two have played twice this year and both times it was the Chinese who won the matches. He Bingjiao leads 7-5 against Sindhu in their individual statistics.

Chen Yufei’s way to a potential semifinal goes via a match against Ratchanok Intanon (6) who she normally has a very good grip of. Ratchanok who is normally superior to many of the other players at the World Tour if down 1-6 against Chen Yufei.

Results from men’s single second round at Fuzhou China Open:

Results from women’s single second round at Fuzhou China Open: