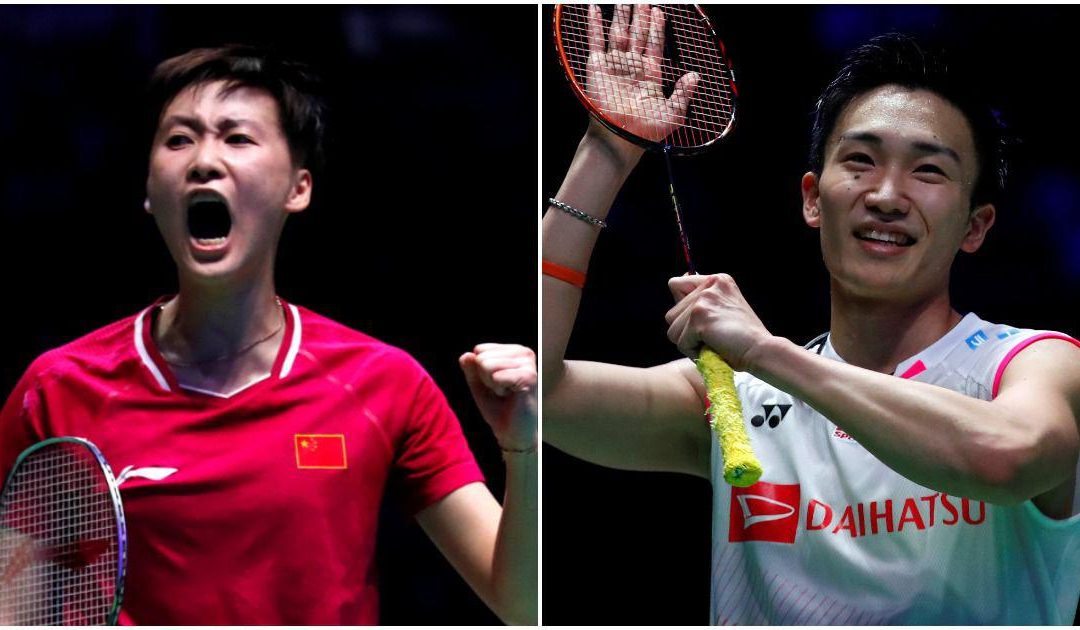 This year’s finals is now over – current champions have proven their worth but new champions have broke through. Get an overview of all the finals here!

The 29-year-old Chou is in the unusual position of not having a coach and instead relies on his longtime physio to guide him courtside during matches. Chou saved one match point but handed Momota the title by hitting into the net. The Japanese player fell onto his back and screamed in celebration, his fists clenched. The peerless Momota, 25, has had another hugely successful year, his haul of titles in 2019 including another world crown and the prestigious All England Open.

Okuhara falls short again
Nozomi Okuhara had to swallow another bitter pill in her sixth title bout this year, with the Japanese failing to surmount the final hurdle yet again. The result was a repeat of last year’s final, with home hope Chen Yu Fei defending her title 9-21 21-12 21-18. It was a strangely underwhelming performance by Okuhara, who, after an excellent start in which she decimated Chen, could only turn on her consistency in fits and starts. The second game was nightmarish for the Japanese with most of her clears – her bread and butter shots on which her game is based – falling long or wide. At the other end, Chen had found her groove, and to Okuhara’s discomfiture, was moving with great efficiency, just a couple of steps on every shot, thus forcing Okuhara to do all the hard work. The Japanese could only attempt to wear Chen down with her interminable rallying style, but Chen’s efficient movement, coupled with her own inconsistency, meant it was always a battle with her back to the wall. There was one rally early in the third that was classic Okuhara, forcing Chen to run her legs off. Chen took a medical break to tend to her foot; upon resumption, the game turned turtle, with Chen winning eight of the next nine points. The Chinese kept going; she stayed in the rallies but was also able to push the pace when she had to, and grabbed most of the opportunities that came her way.

“I tried my best, but it wasn’t enough,” said Okuhara. “It’s very painful to accept. I’m very disappointed that I lost another final. I kept a high speed in the opening game but could not maintain it in the second and third, and I also made a lot of mistakes.”Chen, who also won the All England, Swiss, Australian and Thailand Open titles this year, credited her self-belief for the victory.“I feel honoured and proud of myself,” Chen said. “She was very fast in the first game and I didn’t execute my strategy well, so I couldn’t keep up with her pace. I kept telling myself to be confident. I got the lead in the deciding game so the pressure was on her. I held on to this belief and never gave up. I was doing well when I was the one dictating the pace but when I followed her rhythm, I’d feel very tired. I could win the points when I was the one controlling the rallies.”

The Minions became this years champions in the men’s doubles
Champion title was obtained by Marcus Fernaldi Gideon / Kevin Sanjaya Sukamuljo after defeating Takeshi Kamura / Keigo Sonoda (Japan) 21-17, 21-9. This victory makes  Marcus Fernaldi Gideon / Kevin Sanjaya Sukamuljo winning 10-5 in a record meeting with Kamura / Sonoda. Marcus / Kevin also collected the eighth title this year. Previously, they won the Malaysia Masters, Indonesia Masters, Indonesia Open, Japan Open, China Open, Denmark Open, and French Open. An aggressive game was immediately shown by Marcus / Kevin at the beginning of the first game, through a 5-3 advantage. Even though the Japanese couple were able to equalize several times, the first game interval was successfully achieved with a score of 11-9 for the Indonesian camp. After the break, Marcus / Kevin managed to widen the distance to 14-10. Opponents were able to dilute the deficit of 17-16, but the calmness of the Minions duo when entering a critical point made them lock the first set through the score 21-17.

The Japanese couple rose in the second game. Kamura / Sonoda excelled quickly 3-6 at the start of the game. However, a score of six consecutive points from Marcus / Kevin managed to reverse the position while reaching the interval with a score of 11-8. The momentum of the Indonesian couple continued after the break. Acquisition of points Marcus / Kevin increasingly skyrocketed 17-8. A landslide score of 21-9 ended the final battle for the Red and White camp victory.

New champions in the mixed doubles
In the mixed doubles category, China’s Wang Yi Lyu-Huang Dong Ping registered only their second win over compatriots and world No.1 Zheng Si Wei-Huang Ya Qiong as they won 21-14, 21-13. So far, Wang / Huang himself is known to have won only one victory over Zheng / Huang from 11 meetings that had been held. This happened at the 2018 BWF World Tour Finals. The meeting that took place in the final was won by Wang / Huang with a score of 23-21, 16-21, and 21-18.