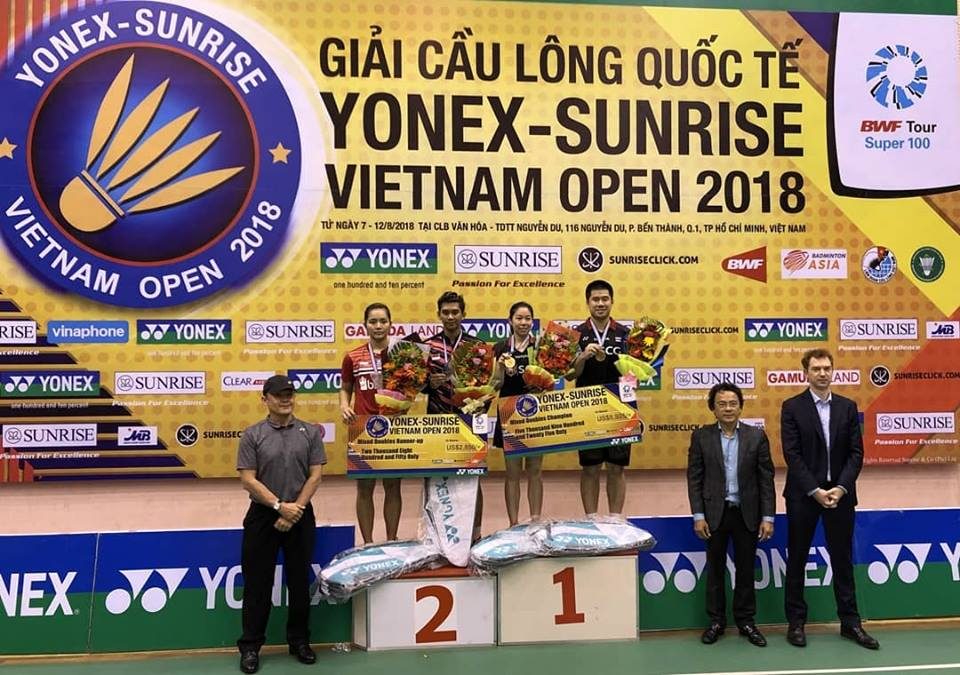 There is a life after the World Championships as the badminton circuit continued with Vietnam Open this week. This week Ho Chi Minh City hosted the Vietnam Open, a BWF Tour Super 100 tournament, and the finals were played earlier today.

Only three seeded entries had made it into Sunday’s finals so the seeds were spread for unseeded success. On top of that no less than eight countries were represented in today’s finals where only the women’s double was an encounter between two pairs from the same country.

Following up last week’s success at the World Championships, it was Japan against Japan in the final – and both pairs were seeded. Misato Aratama/Akane Watanabe, seeded 4, were up against Nami Matsuyama/Chiharu Shida, seeded 6, in the girls’ third encounter. Matsuyama and Shida had a 2-0 lead head-to-head with both previous matches being won in two games.

Both pairs had reached the final losing only one game during the week before playing a close final today. It was Misato Aratama and Akane Watanabe who pulled the longest straw as they won the title in two straight games and hereby reduced Nami Matsuyama and Chiharu Shida’s head-to-head statistic to 2-1.

In men’s single we had a clash between Indonesia’s no. 8 single, Shesar Hiren Rhustavito and India’s no. 9, Ajay Jayaram. The two had only played one time before, all the way back in 2013 where the Indian came out on the winning side.

Today it’s fair to say there was not really any doubt of the result. In a match where the winner was leading all the way through both games, we had found the winner of Vietnam Open this year. Shesar Hiren Rhustavito won comfortably with 14 and 10 and improved his result from last year where he was eliminated in the quarterfinal.

Then followed the only three game match of the day, the mixed double final between Nipitphon Phuangphuapet and Savitree Amitrapai from Thailand and Alfian Eko Prasetya and Marsheilla Gischa Islami from Indonesia. It was the first ever encounter between the two pairs ranked 101 and 149 in the world respectively.

First game was a one way street for the Indonesian pair who were on the way to secure Indonesia’s second title of the day. But the match changed half-way through second game where the Thais took over. Phuangphuapet and Amitrapai won second game and secured a third decisive game. With an 11-7 lead at interval for the Thais it seemed that the match was about to find its winner but the Indonesians came back and gave the spectators a very interesting finish. However, on their first match point it was Nipitphon Phuangphuapet and Savitree Amitrapai who took the title with the small margin of 21-19 – a nice way of celebrating Her Majesty Queen Sirikit’s birthday today, a day which is also celebrated as Mother’s Day in Thailand.

The third seeded player in the finals of Vietnam Open was in women’s single where Han Yue, China, was up against Yeo Jia Min from Singapore. The Chinese, seeded 7, was favorite to take the title – she is ranked 55 spots higher on the world ranking than her Singaporean opponent.

The two players delivered a very intense match. Yeo Jia Min got the best start only to see the Chinese taking over the lead half-way through first game. Min caught up again though and bagged the first game 21-19 after winning four consecutive points at the end. At 15-11 for Han Yue in second game it looked as if we were going to have another three game match, but a strong comeback by the 19-year old Singaporean gave her yet another win of 21-19. Yeo Jia Min had made the surprise and won the Vietnam Open 2018.

From legal court to badminton court

Politics were on court in the men’s double final with the return of former World Champions, Ko Sung Hyun and Shin Baek Cheol from Korea, who played their comeback tournament in Vietnam. The Koreans who won the World Championship title in Copenhagen 2014 won their one-year legal case against the Korean Badminton Association earlier this summer, a case where they had been denied the right to compete in BWF tournaments as independent badminton players.

Ko and Shin were up against Lee Sheng Mu and Yang Po-Hsuan from Chinese Taipei, a pair they had never played before, and it should be a very close match. The Koreans, who went through qualification to enter the first round of Vietnam Open, had won all their matches this week in two games.

The final was played with very fast rallies and an average of only 24.44 seconds per point. Lee Sheng Mu and Yang Po-Hsuan started off best with 10-7 lead in first game but the former World Champions managed to get back and took the game 22-20. From the middle of second game Ko and Shin also lead the way and they got what they came for in their comeback. 21-18 and gold in Vietnam. The strong Koreans are definitely back and it will be interesting to see how long time it will take them to reach the level they had when they won the World Championships in Copenhagen 2014.

Link to all results from Vietnam Open here