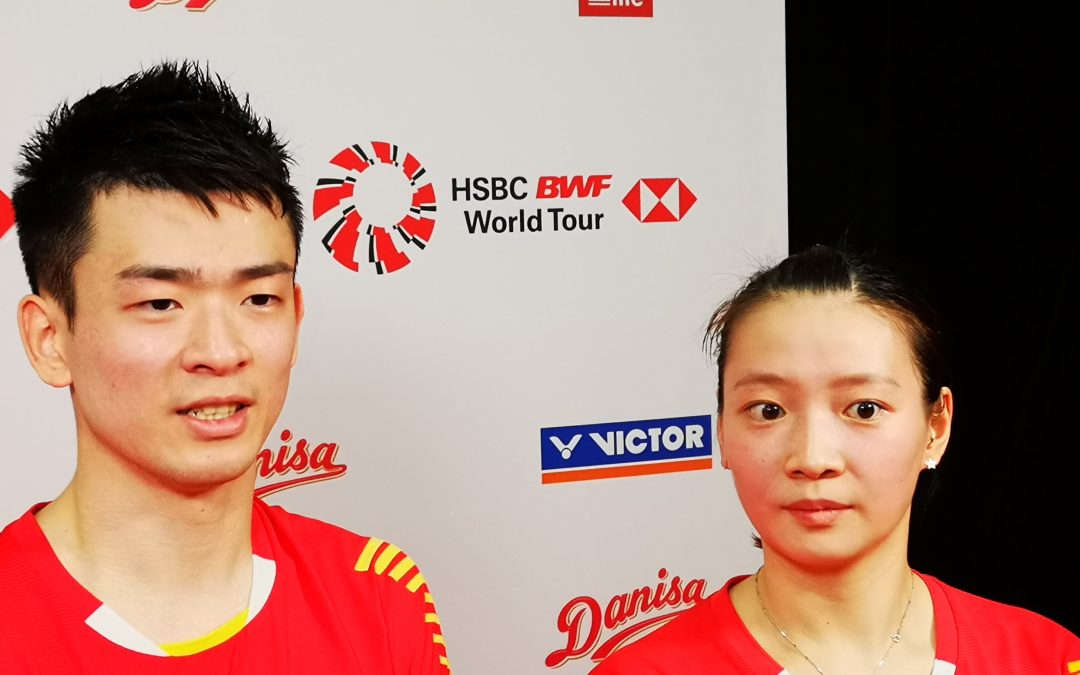 The World Tour Super 750 tournament in Paris keeps on going and we have already found the first finalists of French Open this year. So far we are half-way through the semifinals. So far only one top seeded pair has made it to the final.

Zheng Siwei and Huang Yaqiong continued their undefeated streak in Europe after adding two more straight games wins to their CV yesterday and today. Marcus Ellis and Lauren Smith were stopped by the strong Chinese pair in the quarterfinal while the semifinal was the end for Yuta Watanabe and Arisa Higashino.

Zheng Siwei and Huang Yaqiong will be playing their second final in Europe in just eight days when they go on court on the last day of French Open tomorrow. Their opponents will be Seo Seung Jae and Chae Yujung who, like the Chinese, have won all their matches in straight games. It will be the first encounter between the two pairs and Zheng and Huang must accept the role as favorites in the final.

No top seeds in women’s double

Only in women’s double the top seeded pair was eliminated from French Open before the semifinals. That happened already in second round when Yuki Fukushima and Sayaka Hirota fell short to Chang Ye Na and Jung Kyung Eun. The Koreans however drew the short straw in the quarterfinal yesterday against another Japanese pair, Mayu Matsumoto and Wakana Nagahara, World Champions from August this year.

Matsumoto and Nagahara built on to their French success as they defeated Greysia Polii and Apriyani Rahayu in the semifinal earlier today. Their opponents in tomorrow’s final are yet to be found – it will be either Lee So Hee and Shin Seung Chan or the Bulgarian sisters Gabriela and Stefani Stoeva.

Runner-up from the World Championships 2018, Shi Yuqi, is the first to have qualified for the men’s single final. Like the mixed double pairs, the Chinese have won all his matches so far in straight games. Yesterday he defeated Son Wan Ho without major problems and today he surpassed one of the big surprises of the week, Rasmus Gemke from Denmark. Despite losing today, Gemke has had an extreme week where he made it into his first World Tour Super 750 semifinal ever.

Chou Tien Chen, Hans-Kristian Solberg Vittinghus and Kantaphon Wangcharoen were all defeated by the young Dane on this way to his biggest result ever. The Chinese world number 2 was too much for Gemke though who had to accept a loss in straight games. Shi Yuqi is still waiting for the second semifinal to be played until he knows who to prepare for in tomorrow’s final. That second semifinal is a battle between Kento Momota and Chen Long.

Minions up for double up in Europe

In the men’s double category no less than three unseeded pairs had qualified to the semifinals today. Only the world number 1 and winners of Denmark Open last week, Marcus Fernaldi Gideon and Kevin Sanjaya Sukamuljo – a.k.a. the Minions – have lived up to their seeding so far. They will play the two Indians, Satwiksairaj Rankireddy and Chirag Shetty later today for a spot in the French Open final. The first semifinal was decided in three games between Han Chengkai/Zhou Haodong and Lee Jhe-Huei/Lee Yang. The two times Lee are the title holders from last year in Paris but they fell short to the Chinese duo who won 21-17 in third game.

The last two semifinals of the day are the two women’s singles. This is the only category with four seeded players in the semifinals. At the French Open 2017 Tai Tzu Ying won the title after defeating Akane Yamaguchi in straight games – something she repeated at the All England in March. This year Yamaguchi might have a chance to get revenge as the two players are in each their semifinal today. Yamaguchi is facing He Bingjiao in the last match of the day while Tai is up against another Chinese, Chen Yufei.

You can see all results here: