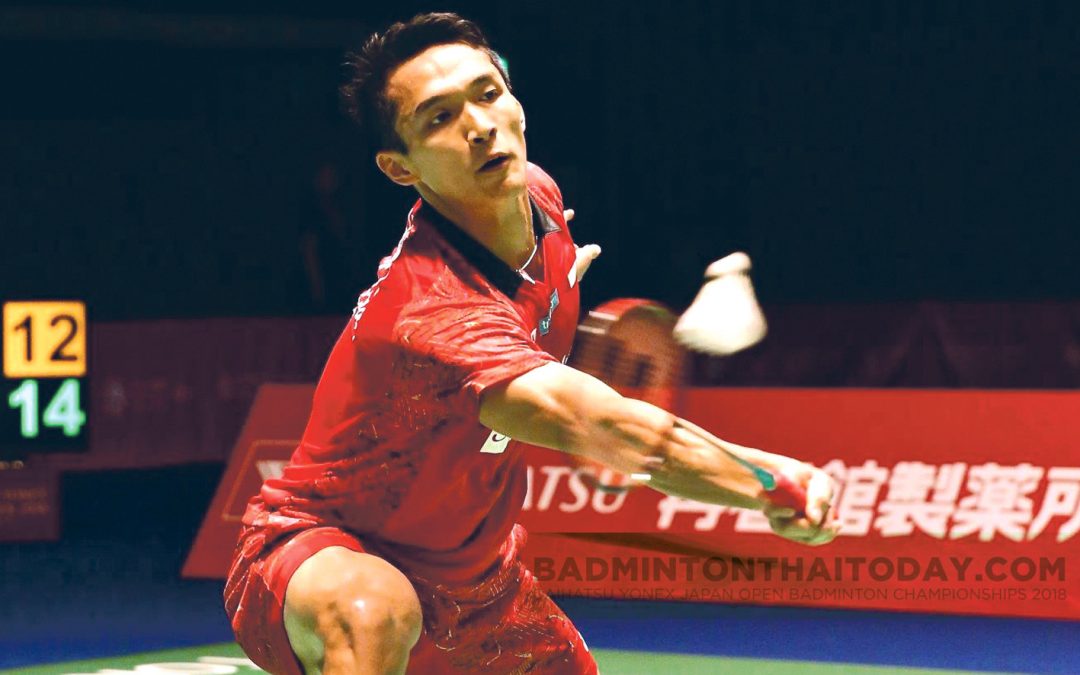 A loss for Praneeth in the men’s singles
World No. 23 Sai Praneeth’s impressive run at Japan Open 2019 came to end in the semi-final on Saturday as he was outclassed by top seed Kento Momota. Praneeth was beaten 18-21, 12-21 in just 45 minutes in the one-sided men’s singles last-four match in Tokyo. Sai Praneeth showed signs of return to form as he reached the semi-final without dropping a game. The Indian shuttler had beaten the likes of Kenta Nishimoto, Kanta Tsuneyama and Tommy Sugiarto in the Super 750 tournament but the test against World No. 1 Momota was always going to be difficult. Defending champion Momota started the match well with a 11-6 lead in the first mid-game interval of the match but Sai pulled things back with 5 straight points. Momota though never let Sai slip away as he kept the pressure on his Indian opponent with a fine display of defensive skills.

Sai Praneeth took a 3-point lead at 9-6 in the second game but Momota went into the mid-game break with a 2-point lead even as errors crept into the Indian shuttler’s game. Momota had 8 match points in the end and he converted his first to reach the final. Notably, Kento Momota, arguably the best men’s singles player in the badminton circuit at the moment, has reached his 2nd successive final. Momota had beaten the likes of Lin Dan and Viktor Axelsen before winning the Japan Open title last year.Barring the run to Swiss Open final in March, Sai Praneeth had been struggling for consistency in the ongoing season. However, the former Singapore Open champion would have gained confidence from his run at the Super 750 tournament. Praneeth, in fact, had become the only Indian to reach the semi-final of Japan Open when he defeated Tommy Sugiarto in Friday’s quarter-final.

Christie will meet Momota in the finals men’s singles
In the final on Sunday, Momota will take on the 21-year-old Asian Games gold medallist, Jonatan Christie, who was equally impressive while winning the “Jan versus Jon” battle by a facile 21-14, 21-14 scoreline over Denmark’s 31-year-old Jan O Jorgensen. The Dane, in his earlier rounds, had lowered the colours of five-time former world champion and two-time Olympic gold medallist, Lin Dan of China, and Taiwan’s Chou Tien Chen, winner of the Indonesia Open last Sunday. The sixth-seeded Indonesian took exactly three-quarters of an hour to put an end to the veteran Dane’s giant-killing run – coincidentally the same amount of time that Momota had earlier taken to show Praneeth the exit door of the Musashino Forest Sport Plaza, venue of the badminton event at the 2020 Tokyo Olympic Games. In Sunday’s battle for the gold medal and cheque of $52,500 in this $750,000 prize money competition, Christie can take heart from the fact that, although he trails Momota 1-2 in career head-to-heads, he won their most recent duel at the Malaysia Open in April this year by a 22-20, 21-15 scoreline. Their earlier two clashes, in 2016 and 2018, had both gone the full distance, so the Indonesian would seem to have the measure of his redoubtable rival.

Japan secures final position in the women’s singles
Meanwhile, host nation Japan geared up for the big show by bagging both the final slots in the women’s singles, in addition to a berth in the men’s singles final. Japan’s Korean coach Park Joo Bong’s cup of joy was full to the brim when both his pre-eminent female players progressed to the summit clash without much ado. Third-seeded Nozomi Okuhara, winner of the World Championship title at Glasgow in 2017, had little trouble in subduing unseeded Michelle Li, employing her trademark attritional tactics to wear down the Canadian of Chinese origin with a 21-12, 21-18 verdict in 48 minutes. Li had earlier caused the biggest upset of the tournament by edging out top seed and erstwhile World no 1, Tai Tzu Ying of Chinese Taipei, at 22-20 in the deciding game of their quarter-final.

Okuhara’s compatriot, Akane Yamaguchi, continued her red-hot streak of form by eliminating China’s second-seeded Chen Yufei by a 21-15, 21-15 scoreline in 42 minutes. The pint-sized Japanese fourth seed, conqueror of India’s Pusarla V Sindhu in her earlier outing, provided further evidence of just how much she has improved, by hardly putting a foot wrong against her higher-ranked antagonist. Yamaguchi judiciously blended defence with aggression, and was swift enough on her feet to reach all corners of the court and still have plenty of time to play her next stroke. The 22-year-old Fukui native kept Yufei constantly guessing as to the placement and trajectory of her next shot, and even played some delectable crosscourt flicks at the net. It did not help the Chinese shuttler’s cause that she had to seek medical attention for a strained shoulder muscle, midway through the second game. The application of the “magic spray” possibly did the trick, and did not appear to adversely affect Yufei’s game thereafter. But Yamaguchi, who will take over the world no 1 position when the Badminton World Federation (BWF) rankings are announced next Thursday, was far too strong and focused to be diverted from her objective.

On this showing, it would occasion a fair amount of surprise if Yamaguchi were to be upstaged on Sunday by her fellow-countrywoman, two years her senior. Even though Okuhara leads their career record 11-7, it was the younger woman who won their most recent clash in straight games, at the Malaysia Open three months back. It is on the cards that this result will be repeated in Tokyo.

The number of the host pair was stopped at 10 and Ahsan / Hendra could close the second game with a distance of 21-10 with a duration of 35 minutes.  Ahsan / Hendra became the third representative of Indonesia to make it to the 2019 Japan Open final. Both followed a mixed double trail of Praveen Jordan / Melati Daeva Oktavianti and single son Jonatan Christie who had already qualified for the top party.

First-seeded in the finals in women’s doubles
First seeded women’s doubles, Mayu Matsumoto / Wakana Nagahara, will meet a South Korean couple, Kim So Yeong / Kong Hee Yong, in the final of the 2019 Japan Open badminton tournament.  Through the fierce battle in the court-1 , Matsumoto / Nagahara successfully overthrew their own compatriot who is the third seed, Misaki Matsutomo / Ayaka Takahashi. It took 49 minutes for Matsumoto / Nagahara to package a straight game 21-16, 21-19, over their colleague who was also the 2016 Olympic gold winner. While at court-2 , the world number 13 pair from South Korea, Kim So Yeong / Kong Hee Yong, managed to win the Chinese number 15 victory over Chinese, Li Wen Mei / Zheng Yu. Had a tough fight in the first game but Kim-Kong successfully took over the game to appear dominant in the second set. The duel that went on in 42 minutes ended two straight sets with a score of 21-16, 21-11. The last meeting took place at the 2019 New Zealand Open, where Kim / Kong managed to defeat Matsumoto / Nagahara in 3 sets.

Good preparations in the mixed doubles
Indonesia’s mixed doubles pair of Praveen Jordan/Melati Daeva Oktavianti advanced to the Daihatsu Yonex Japan Open 2019 finals at the Musashino Forest Sport Plaza, Tokyo. Praveen/Melati beat their compatriots Hafiz Faizal/Gloria Emanuelle Widjaja in the semifinals, with a score of 21-15, 21-18, on Saturday (July 27, 2019). “We often have training together. Hence, we know their plus and downsides. They played good and tried their best,” Praveen said. However, Praveen noted that he and Melati had made good preparations for the semifinals, so that they could play their best and win the match.“This time, in the semifinal round, we were more prepared. Moreover, we know they won yesterday and will play against us in the semifinals. Hence, we prepared ourselves to face them,” he revealed.

In the finals, Praveen/Melati will play against the second-seeded mixed doubles pair of Wang Yi Lyu/Huang Dong Ping of China that had earlier outclassed fifth-seeded doubles mixed pair of Chan Peng Soon/Goh Liu Ying of China in 21-10, 21-6.“In the finals, we will surely demonstrate our best play. We should stay on alert for their rallies. Hence, we must be defensive and focus on the game until it is over,” he noted.

Who will meet in the mixed doubles final?
Chan Peng Soon-Goh Liu Ying are out to end their three-match losing streak against China’s Wang Yilyu-Huang Dongping in the mixed doubles semi-finals of the Japan Open. The Malaysian world No. 5 are hoping to ride on their fine momentum after knocking out world No. 3 Yuta Watanabe-Arisa Higashino of Japan 21-18, 22-20 in a 56-minute quarter-finals. It was Peng Soon-Liu Ying’s fourth win over the Japanese pair in six meetings. However, the Malaysians have lost the last two encounters at the 2018 World Tour Finals and Malaysian Masters in January. Peng Soon said it was time to end their losing streak against Yilyu-Dongping today. The Malaysians have lost all their last three matches against the Chinese since December last year, with the latest defeat being the semi-finals of the Indonesian Open last week. They have beaten the Chinese only twice at the 2017 All-England and the 2018 Indonesian Open. “The victory we earned over Watanabe-Higashino was surely one to savour,” said Peng Soon. “It’s not only because we have finally beaten them for the first time in three matches, but we did it in their own backyard. This venue is where the Tokyo Olympics will be staged next year.We’ve not beaten Yilyu-Dongping for some time. Our recent encounters against them had been close. If we can cut down on unforced errors, we certainly stand a chance.”Peng Soon-Liu Ying have had pleasant memories in Tokyo. They were the champions in 2012 and semi-finalists in two editions – 2016 and 2018.