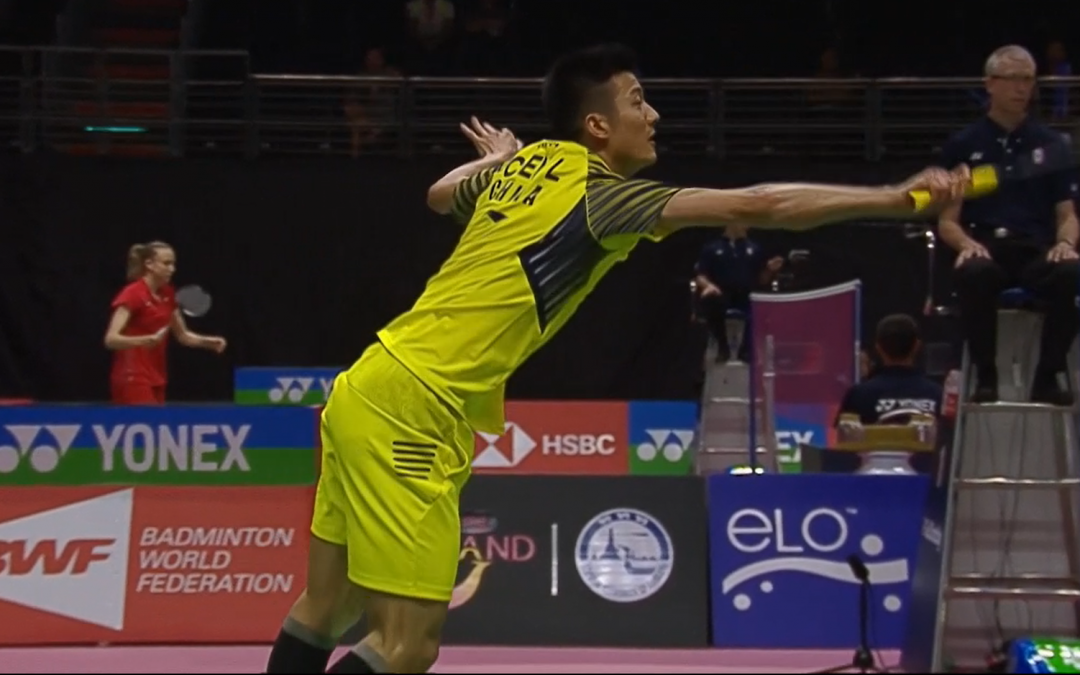 China’s number 2 against China’s number 4 in first round of China Open – that was the scenario in one of the matches this morning in Changzhou. And we were just millimeters from seeing an early upset in this match.

When we still had the Super Series setup it was not possible to be drawn against a player from your own country in first round. The World Tour replaced the Super Series in the beginning of 2018 and one of the changes in this setup is that you can now be drawn against anyone (except seeded against seeded). At China Open this week there are several first round matches with just one nationality on court. One of them this morning was men’s single between Chen Long and Huang Yuxiang.

Huang ranks 31 in the world and was obviously underdog against his legendary compatriot. The two started off with an extremely close first game, which Huang closed with three consecutive points to make it 22-20 in his favor. In second game things were changed as Chen Long gained control. He had a solid lead of 6 points half-way through the game but Huang Yuxiang slowly climbed back. The underdog even brought himself in a favorable situation at 19-15 after winning 6 consecutive points. The Olympic Champion was millimeters from an early exit. Sadly for Huang, Chen Long took the next 6 points and third game was a fact.

The decisive game developed as most would have expected before the match. Chen Long controlled the game from first point and won it fairly comfortable 21-13 on his first match point. Just two more points for Huang Yuxiang in second game and we would have had the first big upset of the week. But we will surely have that in other matches as China Open 2018 is still just few hours old.

In the Taiwanese battle between Chou Tien Chen (5) and Hsu Jen Hao we were also close to an early upset but also here the favorite managed to do his job. Hsu is ranked 35 in the world and actually won the first encounter against his compatriot in straight games. This was more than six years ago though. At Singapore Open this year Chou won easily in straight games and the same was expected to happen today.

He also won first game quite easily with 21-11. Second and third game were close affairs though. In Second game Hsu won with 22-20 and when we reached 18-18 in third game everything was obviously still open. It was Chou who drew the longest straw though as he won third game with another two point margin, 21-19.

As we wrote about in our women’s single preview of China Open on Sunday, two unseeded players had gotten the toughest possible unseeded opponent in first round. Sung Ji Hyun, ranked 9, was facing Saina Nehwal, ranked 10. It was the 11th encounter between the two shuttlers – the Indian was leading 8-2 head-to-head before this week.

It was also the Indian who controlled first game. Nehwal was leading all the way up to a comfortable lead of 17-12 but then she led Sung back into the game. The Korean won 7 consecutive points and was now leading for the first time in the match. Saina Nehwal came back though and won first game 22-20.

In second and third game the Indian was far from her usual power. Sung Ji Hyun had no problems turning things around and she won the two last games easily with 21-8 21-14. She is now awaiting the match between Chen Yufei (5) and Sayaka Sato so she knows who she has to prepare for in second round.

Selected results from first round of China Open: