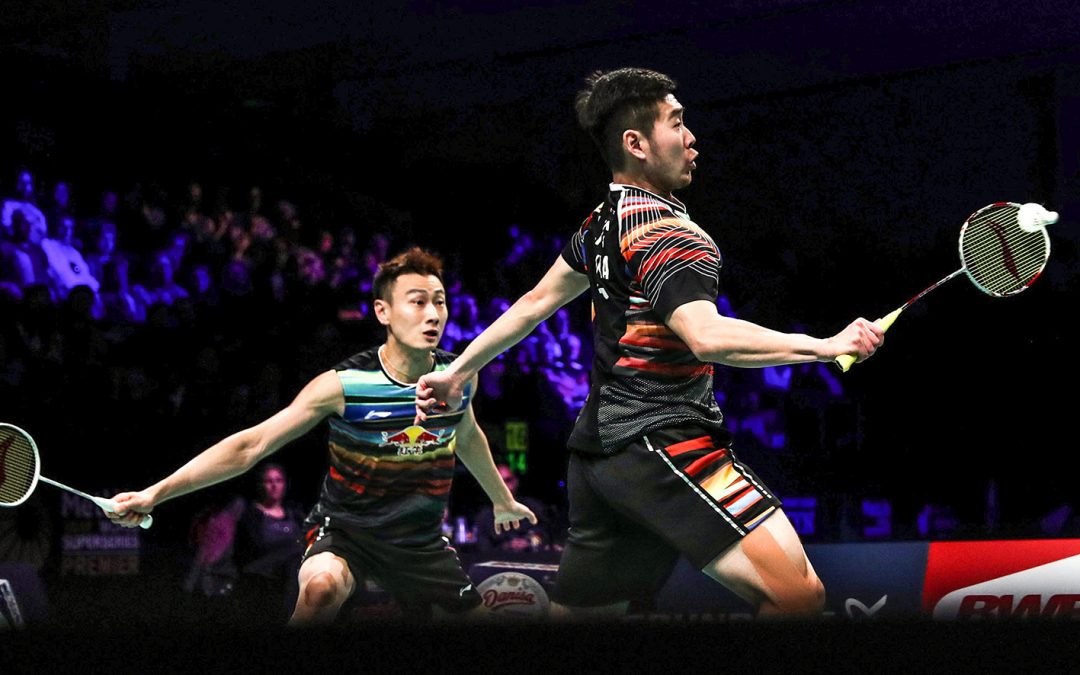 There were four former World Champions on the court in first round of men’s double today. They had drawn each other so obviously two big names would have to leave China Open already in their first match.

At the World Championships 2017 in Glasgow three of the players in what we call men’s double of the day were playing the final. Liu Cheng and Zhang Nan from China drew the longest straw then against Mohammad Ahsan and Rian Agung Saputro from Indonesia. Today Saputro was substituted by Hendra Setiawan and he and Ahsan were playing against the two Chinese in first round.

Mohammad Ahsan and Hendra Setiawan won the World Championships in 2013 and 2015 – and Setiawan also has a gold medal from 2007 when he won the title with Markis Kido. So it was a match with lots of World Championship history in it that we witnessed earlier today.

It was a very short match though that never reached the level we had hoped for. It only took 30 minutes to find a winner – it would have been nice to see more badminton between these four top players but that will have to wait to another time.

First game was a very close affair though so it was not a match completely without excitement. The two pairs followed each other all the way through the game and at 18-18 nothing was sure yet. But when nothing is sure, everything is still possible.

Ahsan and Setiawan won first game 21-19 and were on top in second. 1-1 was the last time in second game that Liu Cheng and Zhang Nan had contact to the Indonesians. Mohammad Ahsan and Hendra Setiawan outplayed the local favorites and 6 consecutive points mid-way through the game broke the Chinese self-confidence. With 21-14 the Indonesians are ready for second round where another Chinese pair is waiting; Huang Kaixiang and Wang Yilyu.

The host nation had better success in other matches during the day. In men’s single silver medalist from the World Championships, Shi Yuqi (2), was up against Tommy Sugiarto from Indonesia. It was 1-1 head-to-head between the two before today’s match and they started off very even in first game.

Sugiarto had 3 game points but failed to bag the game. On his first game point Shi Yuqi took first game 23-21 and this surely took some of the hope from the Indonesian.

Second game was even up to 6-6 though but then the Chinese pulled solidly away by winning the next ten points 9-1. It was over for Tommy Sugiarto who only managed to embellish the outcome a little as he lost 13-21. Shi Yuqi is ready for second round where he will face Lee Hyun Ill. The old Korean eliminated youngster Anders Antonsen from Denmark in three close games.

Read about an impossible mission on next page >>>

Selected results are also on page 2 >>>