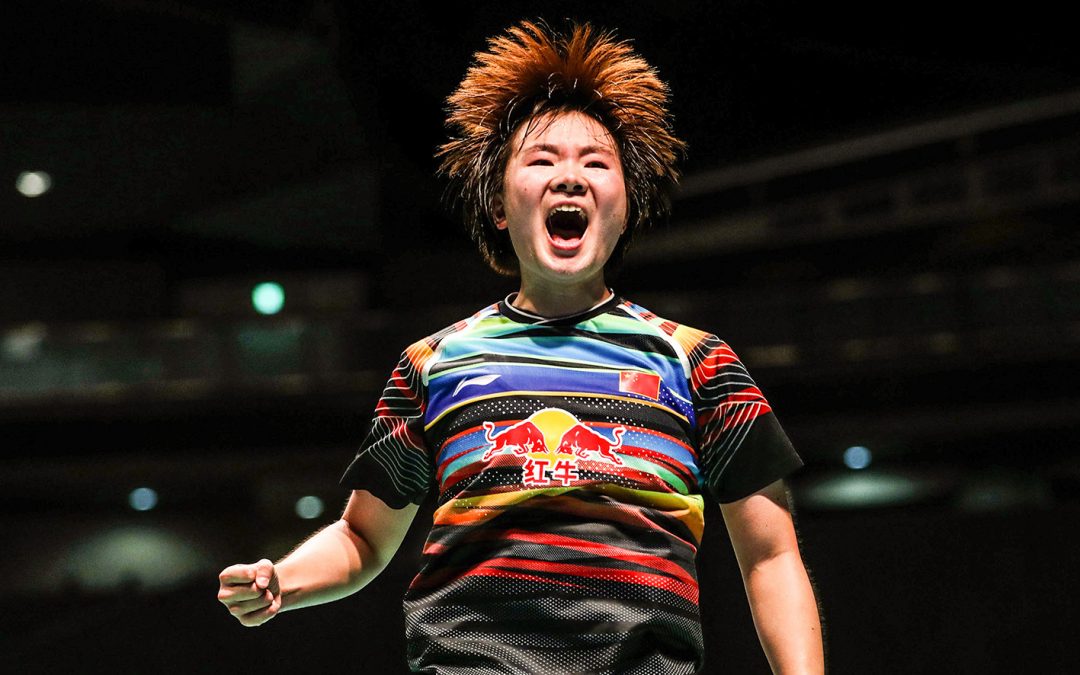 From the previous 23 World Championships that have been played, China has taken the women’s single title no less than 15 times – and they didn’t even participate the first few times. We have to go back to 2011 to find the last Chinese World Champion though when Wang Yihan won in London.

This year China’s hunger for success is bigger than many times before as they play on their home ground and they had two shots in the bag for today’s quarterfinals. As published in our update from earlier today (read more here) He Bingjiao already upset the favorite to the title, Tai Tzu Ying, when she won their battle in three games. Now it was up to Chen Yufei to follow up and bring China the second medal this year.

No. 2 on the world ranking, Akana Yamaguchi from Japan, was the opponent and she went into the court with a 6-2 head-to-head lead against the Chinese. Chen Yufei won their last match at Indonesia Open in July so it was the Japanese who was looking for revenge today.

China’s second shot of the day

And first game seemed as if she would get her revenge. Without the slightest problem on the way, Yamaguchi took first game with comfortable 21-13. It would be interesting to see if the Chinese could come back from this. And those who might have doubted saw a nearly similar second game, however with a different winner. Chen Yufei equalized the match with 21-17 and the players were forced into a third decisive game.

Here they started getting one point each up to 5-5 but then Akane Yamaguchi turned on the turbo. She took the next 8 points and then this match seemed pretty much over. With 21-16 it was the Japanese who could raise her arms in joy after 68 minutes of play.

Women’s match of the day

We published a very interesting – and crazy – update about the statistics in the previous matches between the two shuttlers. If you missed it you can find it right here.

Sindhu was seeking revenge. Not just for the amazing World Championship final last year but also for the latest clash between her and Okuhara, which was at Thailand Open in July. At that time the match was settled in two games.

But it was Nozomi Okuhara who started off best and quickly gained an 8-5 lead. From here the play changed though and P. V. Sindhu got more and more control. She slowly but steadily caught up with the Japanese and was leading the rest of first game, which she won 21-17. Now it was Okuhara’s turn to fight back and again she started best in second game. Via 5-0 and 9-3 she paused at interval with an 11-8 lead but this should show not to be enough.

Once again the Indian fought back and from 11-11 there was no more than one point gap in the scoring. At 19-19 Sindhu must surely have thought that she was very close to getting her revenge – and Okuhara must at the same time surely have been thinking that it was now or never. Sadly for the Japanese girl it became never. Sindhu bagged the match with 21-19 and will now get her fourth World Championship medal. She will be up against Akane Yamaguchi tomorrow while Carolina Marín will face He Bingjiao.

You can see all results from today’s matches here