Badminton players clear the table at the Indonesia Sport Awards 2018 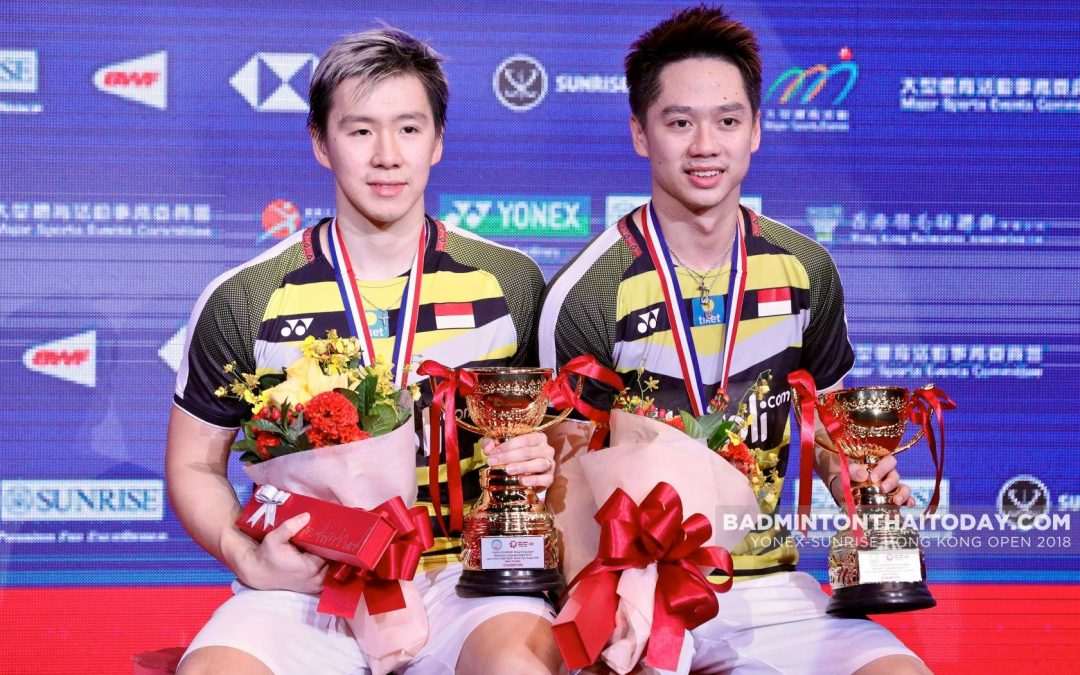 Jonatan Christie and Anthony Sinisuka Ginting were both nominated for Favorite Male Athlete of the Year together with athletes from football, weightlifting, karate and martial arts. Even though Christie won the Asian Games this wasn’t enough to claim the award, which instead went to his training partner Ginting. Both badminton players have had an exceptional good year but Anthony Ginting’s wins at the Indonesian Masters and China Open plus his world ranking as number 7 was deciding in his favor.

The Favorite Male Athlete Couple of the Year was not surprisingly the Minions, a.k.a. Marcus Fernaldi Gideon and Kevin Sanjaya Sukamuljo. With all respect for all other sports and athletes in Indonesia, nobody has performed as great as Marcus and Kevin this year. The two have won pretty much everything this year. It’s as simple as that. Beginning with the Indonesia Masters in January and finishing with the Hong Kong Open in November, the two won no less that 9 tournaments in 2018. And who knows, they will probably also win the season finals in December… Fajar Alfian and Muhammad Rian Ardianto as well as athletes from volleyball and martial arts were also nominated for the award.

For the Favorite Female Athlete Couple of the Year award badminton was also nominated with Greysia Polii and Apriyani Rahayu. They were nominated against athletes from volleyball, rowing, kayaking and martial arts. Greysia and Apriyani who rank 4 on the world ranking ran away with the award as acknowledgement of their exceptional 2018. They won India Open and Thailand Open and then they have reached the semifinals in 7 of their 8 last tournaments.

Badminton also ran off with the award for the Favorite Mixed Athlete Couple of the Year. Not surprisingly this award went to Tontowi Ahmad and Liliyana Natsir who won ahead of athletes from tennis and bridge. This despite the fact that 2018 actually hasn’t been their best year ever. They only bagged one title, which was on home ground at Indonesia Open in June.

The performance of the women’s team at the Asian Games was enough for the Indonesian badminton women to claim the award for the Favorite Women’s Team of the Year. They settled with a bronze medal at the Games, which were held in Jakarta, losing the semifinal to the later winners from Japan. The team was formed by Fitriani Fitriani, Gregoria Mariska Tunjung, Greysia Polii, Apriyani Rahayu, Della Destiara Haris, Rizki Amelia Pradipta, Liliyana Natsir, Debby Susanto, Ruselli Hartawan and Ni Ketut Mahadewi Istarani. The other nominees were from martial arts and rock climbing.

For the para-athletes there were also a few awards. In the category for the Favorite Male Para-athlete Couple of the Year badminton had no less than three nominated pairs. They had to settle with the nominations only though as a pair from table tennis won the award. For the women it went a little better. The Favorite Female Para-athletes Couple of the Year award went to two badminton players.

Sports team of the Year is PB Djarum – a club that has seen many top players in their team during the years; Alan Budikusuma, Ardy B. Wiranata, Eddy Hartono and Liem Swie King in the past – Debby Susanto, Febby Angguni, Maria Kristin Yulianti and Mohammad Ahsan in more recent years. Coach of the Year is Herry Iman Pierngadi and Athletes of the Year are Marcus and Kevin. Finally a Lifetime Achievement Award was given to Christian Hadinata who was active from 1971 to 1986.

Congratulations to all the Indonesian badminton players with the nominations and the awards!