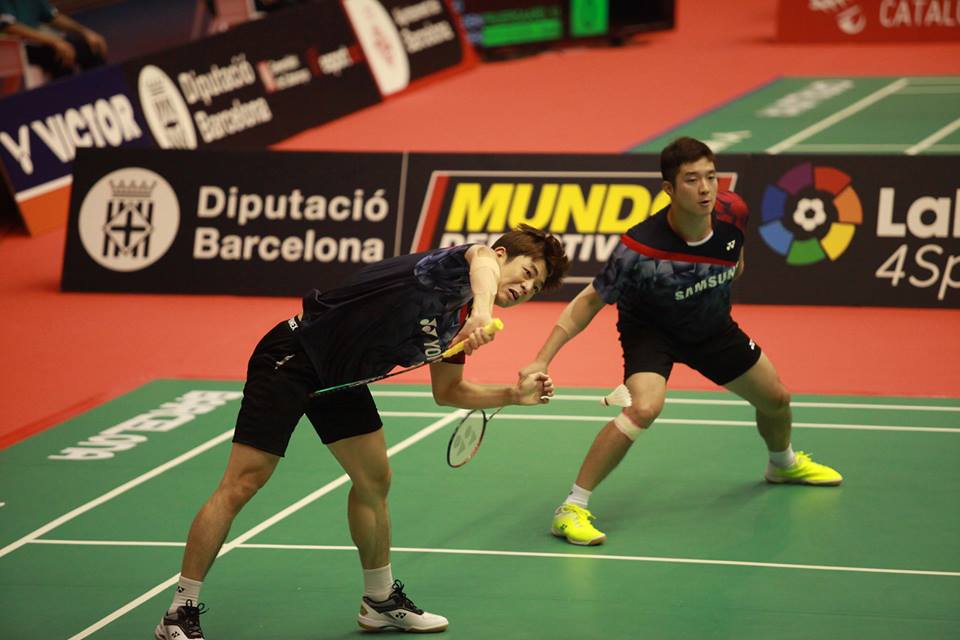 Lee Yong Dae had a really bad day on court today as he and Kim Gi Jung tried to qualify for the semifinal of Korea Open. The legend made several service errors and also received a yellow card due to delaying the game.

The local heroes in the World Tour Super 500 tournament in Seoul were up against Japanese opponents in Takuro Hoki and Yugo Kobayashi. It was the first ever encounter between the two pairs who have 140 spots between them on the world ranking. The Japanese duo ranks 29 and the Korean 169.

All eyes were obviously set on Lee and Kim who were one of two local pairs to defend the Korean colors in men’s double today. The other pair, Choi Solgyu and Seo Seung Jae, was also up against Japanese opponents in Takuto Inoue and Yuki Kaneko.

Things started well for Lee Yong Dae and Kim Gi Jung who were leading all the way through first game. Eventually Hoki and Kobayashi caught up with them at 19-19 and it was the Japanese who could go to interval with first game in the bag; 23-21.

The match continued just as closely as first game had finished. Only from 8-8 we saw the Koreans pull few steps away and they managed to take second game 21-17. A third decisive game was required to find a winner. And what a disaster this final games was…

The Koreans, and especially Lee Yong Dae, had a really bad performance on court in that third game. He couldn’t make his serves function very well and gave away five points on service errors. He delayed the game several times, which resulted in a yellow card from the umpire. Though things still looked open at 15-15 it was the Japanese who drew the longest straw.

With six consecutive points Takuro Hoki and Yugo Kobayashi finished the match winning third game 21-15. A match of 73 minutes was over and the local spectators unfortunately had to accept a loss for the legendary Lee Yong Dae who recently made his comeback to the badminton tour.

It went better for the other Korean men’s double as Choi Solgyu and Seo Seung Jae defeated 4th seeded Takuto Inoue and Yuki Kaneko with surprising comfort; 21-10 21-15 in just 30 minutes. Well done by the pair ranked 192 in the world.

Double up on semis

Seo Seung Jae will play two semifinals in Seoul tomorrow as he also won in mixed doubles with Chae Yujung earlier today. One again it was Japanese opponents who were defeated by Jae. Yuta Watanabe and Arisa Higashino, seeded 7, got two times 16 in the match today.