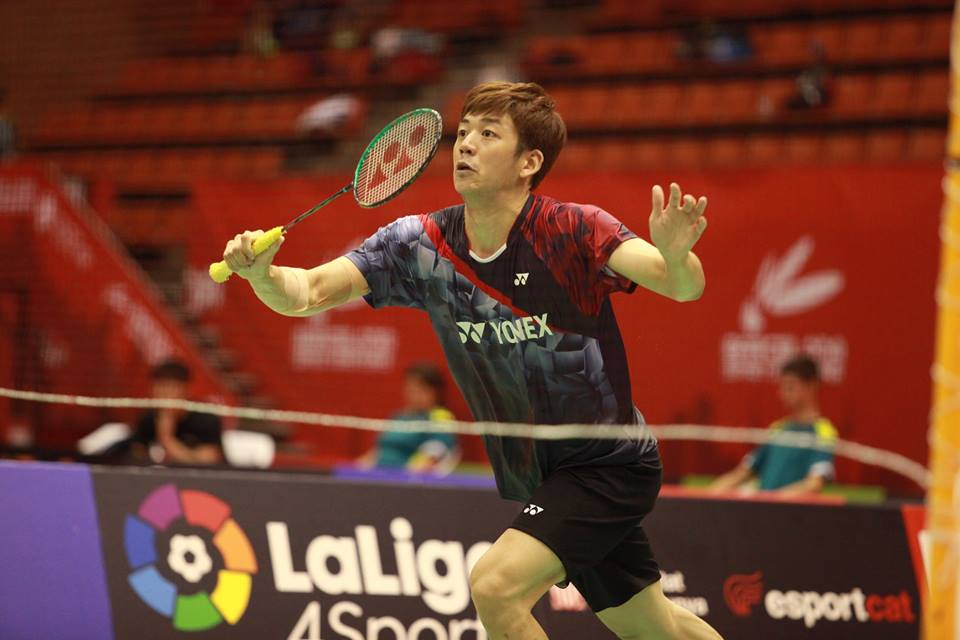 Most badminton fans know Lee Yong Dae who for many years was considered the best male player in the world. An impressive track record supports this statement very well. Not only did Lee top the world ranking few years ago – he has even done so with four different partners. The Korean, who is best known for his men’s doubles skills, officially stopped his career in 2016 but did return for just one tournament in 2017 – the Korean Masters in his hometown where he lost the men’s double semifinal with partner Yoo Yeon Seong. Lee Yong Dae made his comeback at Spain Masters in Barcelona 28 August to 2 September 2018.

It all started when…

Lee Yong Dae started playing badminton when he was 8 years old. He joined the national team in 2003 and made his international debut at US Open same year where he played in two categories; men’s singles and men’s doubles. After having won two qualification matches in singles Lee lost to compatriot Seung Ki Hong in second round. In men’s double he partnered with Lee Cheol Ho and the two also reached second round where they were eliminated by other Koreans, Hwang Ji Man and Jung Hoon Min.

Lee had started playing badminton so he could lose weight and even today one of his rituals is to not eat too much food. His ambitions were always to have a long and successful career in badminton and numerous medals at all the big championships proves that he certainly has had just that. Ironically his biggest result came in mixed double, which may be considered the weaker of the two categories he specialized in.

Below is one of the earliest videos with Lee on YouTube showing Lee (in blue) playing the 2006 Asian Games with partner Jung Jae Sung.

Having three different partners Lee won 39 of the men’s double finals he played at Superseries level from 2007 to 2016 before he temporarily retired. 18 of these were with Jung Jae Sung, 3 were with Ko Sung Hyun, and the remaining 16 were with Yoo Yeon Seong. Their last final together was Korea Open in 2016 where they won in three games against the current World Champions, Li Junhui and Liu Yuchen from China. This was the last tournament before Lee Yong Dae stopped his international career.

He didn’t leave badminton completely though. From the beginning of 2017 Lee was playing in different Asian badminton leagues and towards the end of the year he did participate in Korea Masters in his hometown Gwangju with Yoo Yeon Seong. The two lost the semifinal against Jung Jae Wook and Kim Gi Jung.

Below is a crazy rally from the Korea Masters 2017. As you can see Lee shows a good high level.

In the different senior championships the collection of medals is even bigger. Lee Yong Dae has been in the Asian Championship final five times and that has resulted in just as many gold medals. One in mixed double with Lee Hyo Jung in 2009 and four in men’s double with three different partners in 2008, 2013, 2015 and 2016.

Lee never managed to win gold at the World Championships though despite being in no less than three finals. That was all in men’s double. One of the most memorable matches he played was the World Championship final in Hyderabad in 2009. That year Lee Yong Dae and Jung Jae Sung lost 26-28 in third game against Cai Yun and Fu Haifeng. He also has silver medals from 2007 and 2014 plus bronze from 2011 and 2015 as well as bronze in mixed double from 2009.

Several medals with the teams

There have been lots of medals for Lee Yong Dae with the Korean teams – men’s team in Thomas Cup and Asian Games and mixed team in Sudirman Cup – but he can only show one gold medal. That’s from the 2014 Asian Games. Korea lost the Thomas Cup final twice with Lee in the team (2008 and 2012) and they had to settle for bronze in 2016.

With the mixed team he has five medals in total – all won in five consecutive editions of Sudirman Cup from 2007 to 2015. Korea lost two finals against China – that was in 2009 and 2013 – and then they were eliminated in the semifinals three times. In 2007 and 2011 it was again China who stopped the Koreans, and in 2015 they lost a close semifinal 2-3 to Japan. At the first Sudirman Cup after Lee Yong Dae had stopped his career, Korean won the gold after defeating China 3-2 in the final…

Below is a video of the ending in the 2009 men’s doubles final, which shows an amazing level and an amazing result.

Highlight of the career

The highlight of Lee’s career came in 2008 when he won the Olympic Games in Beijing. It wasn’t in his favorite category though, but in mixed double where he once again partnered with Lee Hyo Jung. They won the Olympic final in straight games over Nova Widianto and Liliyana Natsir from Indonesia. In Lee’s favorite category, men’s double, he “only” won Olympic bronze when he and Jung Jae Sung lost the semifinal at the 2012 London Olympics against Malaysians Koo Kien Keat and Tan Boon Heong.

Finally, at the Asian Games, where we just witnessed the 2018-edition finishing this week, there were never any titles for Lee either. He does have three medals though; two bronze from 2006 and 2010, and one silver from 2014. All of these have been won in men’s double.

One year ban by BWF

It hasn’t been glory all the way for Lee Yong Dae during his long and impressive career. Due to three whereabouts failures in 2013, he and partner Kim Gi Jung received a one year ban from BWF in January 2014. They didn’t fail any doping tests but giving wrong information to BWF about their whereabouts also counts. If this information is wrong, BWF cannot conduct the out-of-competition testing.

But in April 2014 the ban was reversed “based on new evidence” as BWF put it. It turned out the failures in the whereabouts were because of misunderstandings with the Korean Badminton Association and Lee returned to play again immediately.

Finally in 2017 several Korean players including Lee Yong Dae have had their struggles with their national badminton association as it refused to enter them in different tournaments because they had retired from the national team and were not yet over 31 years old. How that age limit came into action, nobody really knows, except that it was something the Korean Badminton Association had decided. It was a tricky case, of course, but the main problem was that it was the national association that had to sign the players up for tournaments and when they refused to do so, problems were served.

Below is a video with some cool rallies and tricks by Lee Yong Dae and his partners.

Goodbye after the 2016 Rio Olympics

During 2016 Lee announced that he would retire after the Olympic Games in Rio de Janeiro. He did so on home ground at Korea Open in September that year.

In Rio de Janeiro things didn’t go as hoped for Lee and partner Yoo Yeon Seong. After finishing second in their group after Russians Vladimir Ivanov and Ivan Sozonov, Lee and Yoo were paired with Goh V. Shem and Tan Wee Kiong from Malaysia in the quarterfinal. And the quarterfinal was where it ended for the Koreans. In a close match they lost third game 19-21 and the Malaysians moved on to the semifinal and later to the final as well.

The reason for retiring was that Lee felt too much pressure from the Korean people. He actually regretted playing the Olympics in 2016 because of this pressure and believed they would have come back with a much better result if it hadn’t been for the pressure. But that’s history. It cannot be changed now.

Lee had been with the Korean national team 14 years and also wanted to leave the stage in the hands of the younger players. His wish was to see other players participate in three Olympic Games like he had done himself and he was convinced that Korean badminton would come out stronger if the young ones were given the chance.

So on 2 October 2016 Lee played his last match. It was the men’s double final at the Korean Open, which he won with Yoo Yeon Seong. A legend was saying goodbye…

With this title we must say it was a perfect comeback. It will be nice to see the world’s (former) best men’s double player in action on a regular basis in the future.